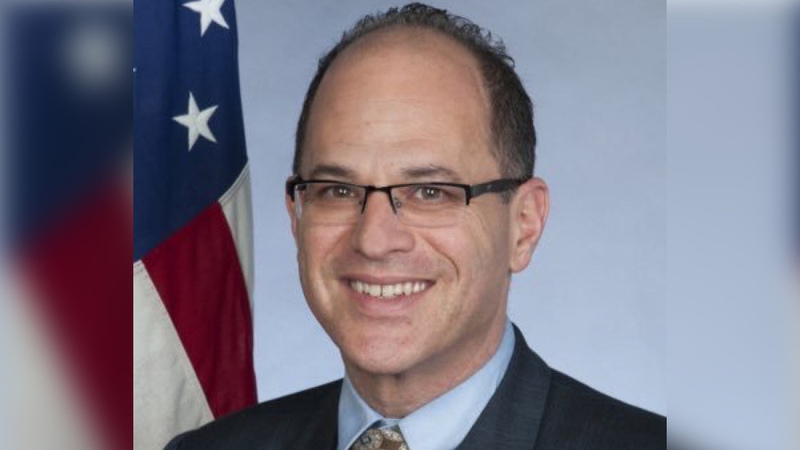 AKIPRESS.COM - Deputy Assistant Secretary of State of the Bureau of South and Central Asian Affairs Jonathan Henick Jonathan Henick talked about bilateral relations in an interview for AKIpress on August 1.

Question: What were the main achievements of the recent U.S.-Kyrgyz bilateral consultations?

Answer: I’m happy to say that over the last several years, we’ve had great success in building a renewed relationship between our two countries. We are renegotiating our bilateral cooperation agreement in order to strengthen relations and identify opportunities to further expand cooperation between the United States and the Kyrgyz Republic on a variety of fronts: job creation, increasing foreign direct investment and improving the business climate, community policing, combatting air pollution, promoting rural agriculture, and critical advances in health care and education.

President Jeenbekov has made very clear his desire to implement a multi-vectored foreign policy and strengthen relations with all of the Kyrgyz Republic’s partners, including the United States. We welcome the President’s initial steps to improve relations and continue to contribute to the achievement of our common goals.

What is the status of a new bilateral cooperation agreement?

Negotiations for a new bilateral cooperation agreement, one of the most fundamental elements of our relationship, are progressing forward as planned. The latest round of negotiations ended earlier this week. We cannot stress enough the importance of this agreement, as well as the detrimental impact its absence has had on U.S. government assistance budgets for the Kyrgyz Republic. There have been many missed opportunities, but we are focusing on the potential for the future. With goodwill on both sides, I’m confident we can get this agreement completed quickly.

Do you know how much money the United States is providing this fiscal year for projects in Kyrgyzstan?

While funding varies from year to year, the United States has provided longstanding support for assistance projects in the Kyrgyz Republic. U.S. support totals over $2 billion since the Kyrgyz Republic’s independence, and assistance projects total $33 million this fiscal year. U.S assistance covers a broad range of programs, but all of our programs support goals and interests common to both of our countries: ensuring a strong democracy, promoting economic prosperity, and providing for a secure and stable Kyrgyz Republic. From English language courses to educational and agricultural programs, and many areas in between, the United States partners closely with the Kyrgyz government, civil society, businesses, educational institutions, and Kyrgyz citizens.

For example, our English programs such as Access Microscholarship provide free English language training to hundreds of young Kyrgyz students across the country. Our FLEX program sends dozens of Kyrgyz high school students to the United States for a year of study. And our English For Young Professionals program provides tools for over 1,000 Kyrgyz government and public-sector employees to advance their careers, resulting in stronger connections between our countries. English is the key to success in today's increasingly competitive global marketplace and the U.S. Embassy is proud to support the Kyrgyz government in strengthening the skills of its citizens.

Through USAID, the United States partners with the Kyrgyz people and the government to improve the country's economy, governance, health, and education so that families can live better lives. USAID's investments have resulted in significant and lasting achievements that boost the economy and provide viable alternatives to migration. In the tourism sector, for example, our support greatly contributed to Kyrgyzstan being included on Lonely Planet's list of the top ten travel destinations for 2019. Our investments also lead to tangible economic benefits. Last year, for every $1 we invested in the agricultural sector, more than $7 were leveraged in private capital and expertise. This benefited over 30,000 farmers in regions with the highest rates of poverty, creating jobs and economic prosperity for rural communities.

Our partnership with the Ministry of Justice to implement the 2016 Law on State-Guaranteed Legal Aid included support for 10 new Free Legal Aid Centers, training and equipment, and publicizing the legal services available. As a result, the number of Kyrgyzstanis benefiting from free legal aid has increased by 45%, to more than 46,000 in 2018. These services can be life changing for everyday Kyrgyzstanis struggling to understand and navigate the country’s modern judicial system in pursuit of their constitutional rights as Kyrgyz citizens.

In order to assist the Kyrgyz Republic’s transition from a confession-based criminal justice system to an evidence-based one, the U.S. government helped increase the capacity and technical expertise of the State Forensic Service with support of more than $2 million. The funding helped to refurbish the Forensic Center, provide training to prepare the lab to meet international accreditation standards, and implement a centralized system to ensure the protection of evidence. These changes will enable the Kyrgyz Republic to strengthen its justice system and ensure the rights of due process and a fair trial to each and every Kyrgyz citizen.

Additionally, the U.S. government is committed to improving the investment climate and building the capacity of the Kyrgyz business community, with the ultimate goal of boosting bilateral trade and economic prosperity here in the Kyrgyz Republic. The U.S. Embassy hosted a business facilitation seminar on April 25 in which leading commercial and legal experts taught an audience of 270 Kyrgyz businessmen and women about critical business practices and standards. We are working to prepare Kyrgyz entrepreneurs for the upcoming International Franchise and Trade Expo that will take place on October 10, 2019, in Bishkek. The United States believes that by expanding commercial partnerships with respectable global companies and by increasing foreign direct investment, the Kyrgyz economy’s productivity and bilateral trade with the U.S will also increase.

And I could go on. These are only a few of the many initiatives that the U.S. government has implemented this past year to support the Kyrgyz government and its people.

When can we expect the CASA-1000 project to kick off?

The CASA-1000 interregional electricity transmission project, which will help the Kyrgyz Republic and Tajikistan sell excess summer hydroelectricity to energy-hungry Afghanistan and Pakistan, is a vivid illustration of what is possible when the United States helps to bring the region’s governments together.

It gives me great pleasure to share with you that the Central Asia-South Asia Power Project is well underway, with contracts signed and construction in Kyrgyzstan starting this year. The project is expected to be completed in 2022 and will deliver 1,300 megawatts of hydropower to Pakistan, providing a significant boost to Kyrgyzstan’s energy exports. This will be a proud moment for the entire region!

The chapter of the U.S. State Department Human Rights Report on the Kyrgyz Republic cites NGO opinions that criminal cases against former Prime Ministers Sapar Isakov and Jantoro Satybaldiev are "politically motivated." Did this statement get into the report just by chance? Does the State Department have a differing position on this issue?

The Human Rights Report provides a balanced account of the human rights situations in countries around the globe. This year’s report on the Kyrgyz Republic, as in past years, is a compilation of credible statements and analysis of the Kyrgyz government, civil society, subject matter experts, and other relevant bodies. This includes the views of some human rights organizations who believe that there are political prisoners in the Kyrgyz Republic.

Importantly, in this year’s Human Rights Report, the United States highlighted many of the positive developments made in the Kyrgyz Republic’s human rights sphere.

What is the viewpoint of the U.S. State Department regarding criminal prosecution of former political opponents?

The United States supports due process within the judiciary system. We recognize the sovereignty of all nations and encourage the Kyrgyz Republic and every other member of the community of nations to commit themselves to the transparency and independence of its judiciary, and would invite other nations to do the same. By ensuring a fair trial for all cases in accordance with the law, the Kyrgyz Republic will also become more attractive to investors and business partners as well.

Are any events coming up within the “C5 + 1” framework this year?

As you may know, the United States is promoting greater regional interconnectivity and cooperation through our C5+1 initiative, with “C5” representing the five Central Asian states, and the “+1” referring to the United States. The C5+1 format includes thematic working groups, comprised of representatives from the five Central Asian states, that focus on economics and connectivity, environment and energy, and security. Our C5+1 platform directly supports the priorities of President Jeenbekov, who is focused on strengthening the Kyrgyz Republic’s relations with its neighbors, as well as with other foreign partners, in order to establish a more balanced foreign policy approach.

We hope that through our efforts and support the countries of Central Asia will understand that they have a meaningful and reliable partner in the United States, one that will help them globalize in ways that benefit their populations. During this trip, I was glad to participate in a C5+1 regional conference, in partnership with the U.S. Institute for Peace and in collaboration with Search for Common Ground and the Kyrgyz State Commission on Religious Affairs. The second phase of a C5+1 initiative to prevent violent extremism is just starting, with the participation of government and community leaders. It is vital for the nations of Central Asia to discuss regional issues -- like violent extremism -- and address them proactively together. The United States stands with Central Asia to support these efforts to fight back against terrorist groups such as ISIS.