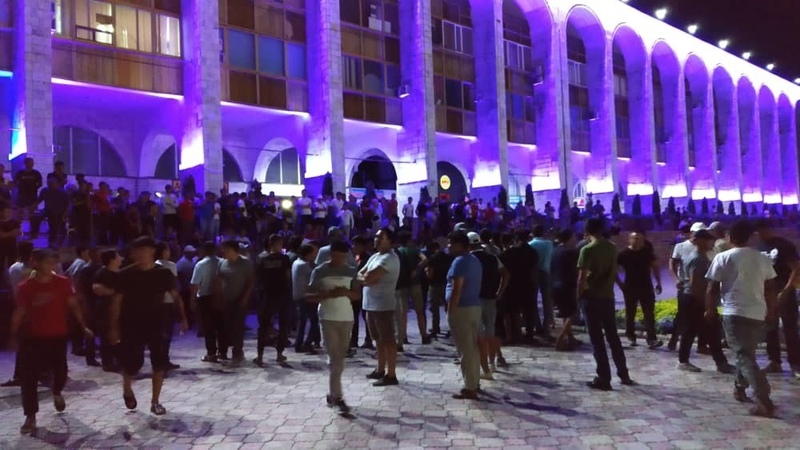 AKIPRESS.COM - Crowds, reportedly supporters of Almazbek Atambayev, started gathering in Ala-Too Square in Bishkek at around 9 pm.  None of them told media representatives whom they represent and support.

Supporters of Atambayev outside National Security Committee (GKNB) and the Interior Ministry said they have nothing to do with people on the Ala-Too square.

08:00: Situation in Bishkek is normal, no disorders were spotted.

04:30: Atambayev was still in the GKNB. His attorney was unavailable for comments.

02:42: Video of detention of protesters in Ala-Too square emerged online. The video shows police officers beating up the detainees. One of the young men captured by police officers was beaten up by several policemen using batons.

02:00: Ex-President Atambayev is still held in GKNB, his advisor Farid Niyazov and SDPK spokesperson Kunduz Joldubaeva are in the Interior Ministry.

01:30: Police cars and buses are patrolling streets of the capital city.

00:56: Traffic cameras were broken on some road intersections.

00:25: The crowd blocked one lane on the Ahunbaeva-April 7 ring road.

23:59: Around 1,000 citizen patrol volunteers said they will guard public and private property to prevent looting and disorders.

23:50: The police detain those trying to destabilize the situation in the capital city, the Interior Ministry said. 23:28: The Ala-Too square is being unblocked. The railings are removed.

23:24: It is calm in other parts of Bishkek. Public transport is functioning as normally.

23:05: Police forces in uniform and with iron shields arrived at the square. They are heading in the direction of the Parliament building.

23:02: The mob of aggressive young people attacked a group of journalists. Several reporters had to leave the square.

23:00: Supporters of Almazbek Atambayev rallying outside the Interior Ministry and the State National Security Committee said they have nothing to do with citizens rallying at Ala-Too square.