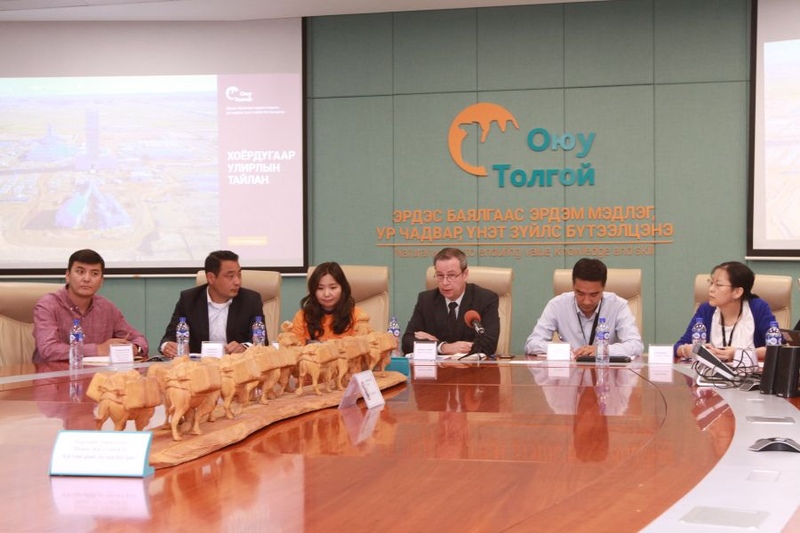 AKIPRESS.COM - Oyu Tolgoi on August 8 announced an update on its performance for the quarter ended June 30, 2019, Montsame reported.

Oyu Tolgoi and seven other mining companies joined a voluntary code of practice for responsible mining initiated by the Mongolian National Mining Association. Together the signatories will work to increase public understanding of responsible mining operations, improve the transparency, safety, environment protection and community development policies across the mining sector.

In the second quarter of 2019, Oyu Tolgoi achieved an All Injury Frequency Rate (AIFR) of 0.12 per 200,000 hours worked. Safety is a top priority as we maintain strong safety performance and culture across the workforce. Among safety training provided by the company, most notable was the occupational safety training organized for miners and residents of Zaamar soum, Tuv aimag.

Guided by the vision to create enduring value, knowledge and skills, Oyu Tolgoi worked continuously to expand partnership with institutes of higher education and vocational schools. Oyu Tolgoi signed a MoU with Geology and Mining School of the Mongolian University of Science and Technology to enhance the quality of the curricula and the study environment. In addition, Oyu Tolgoi was named Best Partner Organization by the National University of Mongolia. The company provided 341,919 man hours of training to nearly 13,266 employees and contractors in the second quarter of 2019.

Oyu Tolgoi LLC and Mobicom Corporation partnered with the National Police Agency to implement the “No need to speed” campaign, developed to reduce the number of deaths and injuries caused by traffic incidents in Mongolia. In addition to the MNT280 million campaign, speedometer cameras will be installed along the road to Sainshand, Dornogovi aimag, an area known for vehicles traveling at excess speed, causing high rates of car accidents resulting in serious injuries and deaths.

Oyu Tolgoi paid US$2.4 billion in taxes, fees and other payments to the Government of Mongolia between 2010 and the second quarter of 2019 including US$107 million in the first half of 2019.

Oyu Tolgoi collaborated with 689 suppliers in the first half of 2019, 484 of which are national businesses that account for 76 percent of total operations procurement spent. Between 2010 and the second quarter of 2019, Oyu Tolgoi spent US$2.9 billion on national procurement of which US$488 million was spent on procurement from Umnugovi suppliers. “Made in Umnugovi” expo was organized in Dalanzadgad under the “Made in Mongolia” strategy to support small and medium-sized enterprises.