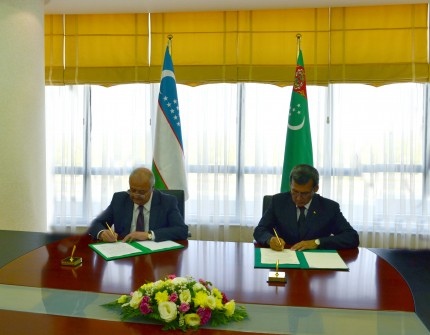 During the talks, the parties noted the positive dynamics of the development of multilateral ties between the two fraternal countries.  The diplomats considered the issues of bilateral cooperation in political, trade-economic and cultural-humanitarian spheres.  The importance of organizing the mutual visits on the high and highest level which makes a vital contribution in the process of developing Turkmen-Uzbek dialogue was noted.

The parties considered the opportunities of further strengthening of collaboration in the framework of regional and international organizations, particularly the UN and the OSCE.  The active work of the countries aimed at the implementation of the Agenda 2030 was noted which positively affects the economic and social stability of two countries.

Speaking about the common historic roots, the Minister of Foreign Affairs of Uzbekistan A.Kamilov specifically underlined the significance of the “open door” policy of Turkmenistan based on the principles of good-neighborhood and mutual respect, as well as contributes to maintaining of security and prosperity in the whole Central Asian region.

During the talks, the parties stated the necessity of widening cooperation in the sphere of water and land resources.  Also, the opportunities of exchanging visits on different levels with the aim of getting acquainted with the potential of two countries in the area of engineering, education and tourism were considered.