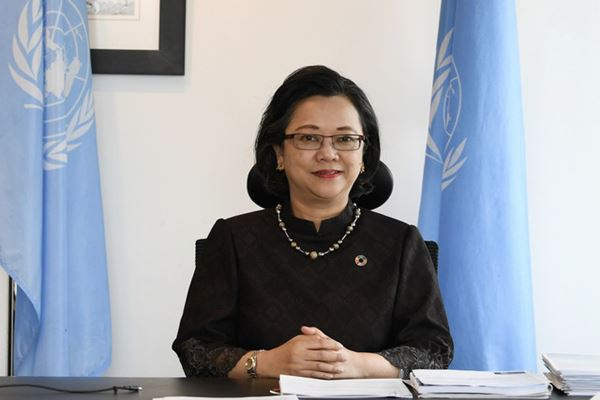 AKIPRESS.COM - Mongolia’s economic rebound in recent years reveals a country rising up to the challenges borne from adverse economic shocks, Ms. Armida Salsiah Alisjahbana, Under-Secretary-General of the United Nations and Executive Secretary of the United Nations Economic and Social Commission for Asia and the Pacific (ESCAP) said upon visit to Mongolia.


"The country’s economic resilience comes as no surprise. Mongolia has responded well to near-term economic challenges and chartered its long-term path towards sustainable development despite its inherent constraints as a small and landlocked economy that is also highly dependent on natural resources. Mongolia prides itself as being one of the first countries to adopt the Sustainable Development Goals (SDGs), with Mongolia’s Sustainable Development Vision 2030 receiving parliament approval in 2016 just six months after the adoption of the SDGs globally.

In particular, Mongolia’s policy experiences in areas of economic diversification, good governance and regional cooperation were well-exemplified by the Action Program of the Government of Mongolia for 2016-2020. So, Mongolia has utilized these policy tools to carve for itself strategic positions to weigh in on issues significant to the country’s national development outcomes. For example, Mongolia leads the global agenda of the needs and challenges faced by landlocked developing countries (LLDCs). The presence of the International Think Tank for LLDCs in Ulaanbaatar further highlights the key role of Mongolia as a credible broker of the LLDCs development agenda.

Currently, Mongolia has substantively engaged on trade facilitation initiatives including the Framework Agreement on Facilitation of Cross-border Paperless Trade in Asia and the Pacific. There is great potential for Mongolia to strengthen its role in the related area of transport facilitation, given its position as a transit point between big economies like China and the Russian Federation. Also, we are pleased that Mongolia is soon to become the seventh member of the Asia-Pacific Trade Agreement, a preferential regional trade agreement, open to all developing member States in Asia and the Pacific.

With inherent constraints due to its fragile economic structure and environmental condition, Mongolia constantly needs to find balance between providing prompt policy responses in the face of volatile and unpredictable external shocks in the short-run and pursuing structural changes to address long-term socioeconomic issues. Under these circumstances, pursuing an integrated approach becomes an imperative for Mongolia to advance its national socioeconomic agenda, regional connectivity agenda and global sustainable development agenda, bolstering Mongolia’s resilience towards adverse economic, social and environmental shocks. To this end, I welcome Mongolia’s emphasis on the “whole of government” plus a “whole of society” approach.

Through the years, we have seen how Mongolia continues to be a steadfast partner of the United Nations Economic and Social Commission for Asia and the Pacific (ESCAP) in promoting regional trade, connectivity and development across its various interrelated dimensions. Mongolia has also provided leadership in advancing regional cooperation agenda in the Asia-Pacific region by chairing the seventy-fifth session of UN ESCAP in May 2019.

Equipped with lessons learned from past development challenges and mindful of new directions and approaches to nurture future opportunities, Mongolia’s regional position and potential are on the rise. I am looking forward to partnering with Mongolia’s leadership to strengthen regional cooperation and achieve sustainable development by 2030 with the United Nations family".