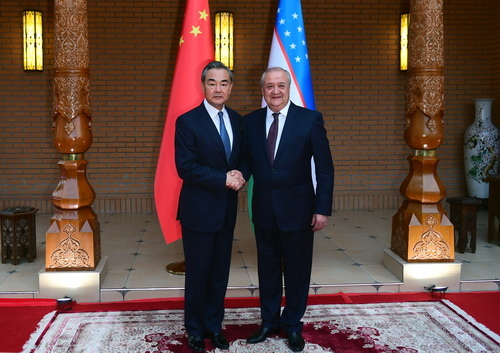 Kamilov attended the inauguration of the new premises of the Uzbek Embassy in China.

"The two countries firmly support each other on issues concerning their core interests and major concerns, effectively safeguarding their common interests. The Chinese side is willing to work with the Uzbek side to deepen all-round cooperation, and continue to enrich their comprehensive strategic partnership,"  Wang Yi said.

He added that the Chinese side supports the Uzbek side in hosting the Meeting of the Council of Heads of Government of the Member States of the Shanghai Cooperation Organization (SCO). China is willing to reinforce coordination and cooperation with Uzbekistan to promote the SCO for faster and better development.

Abdulaziz Kamilov for his part said that the Uzbek side firmly adheres to the One China policy, and firmly stands together with the Chinese side on issues concerning China's core interests. The Uzbek side has, together with the international community at large, sent a jointly-signed letter to President of the United Nations (UN) Human Rights Council and the UN High Commissioner for Human Rights to support a series of deradicalizaiton measures taken by China's Xinjiang Uygur Autonomous Region. No country is entitled to interfere in China's internal affairs. The Uzbek side is ready to enhance communication and coordination with the Chinese side within frameworks including the SCO to jointly combat the "three forces" of terrorism, separatism and extremism and safeguard regional peace and stability. Both sides also exchanged views on promoting the process of political settlement of the Afghan issue, situation between India and Pakistan, and other topics.