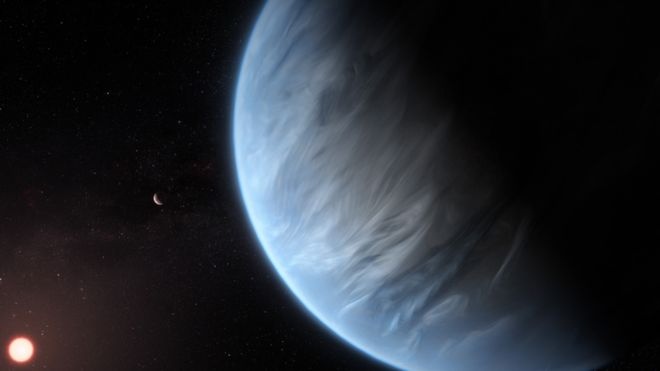 AKIPRESS.COM - Astronomers have for the first time discovered water in the atmosphere of a planet orbiting within the habitable zone of a distant star, BBC reports.


The finding makes the world - which is called K2-18b - a plausible candidate in the search for alien life.

Within 10 years, new space telescopes might be able to determine whether K2-18b's atmosphere contains gases that could be produced by living organisms.

Details were published in the scientific journal Nature Astronomy.

"This is the first time that we have detected water on a planet in the habitable zone around a star where the temperature is potentially compatible with the presence of life," she said.

The habitable zone is the region around a star where temperatures are considered sufficiently benign for water to exist in liquid form on the surface of a planet.

The new planet is just over twice the size of Earth - in a planet category known as a "super Earth" - and has a temperature cool enough to have liquid water, between zero and 40C.

K2-18b is 111 light-years - about 650 million million miles - from Earth, too far to send a probe. So the only option is to wait for the next generation of space telescopes to be launched in the 2020s and to look for gases in the planet's atmosphere that could only be produced by living organisms.