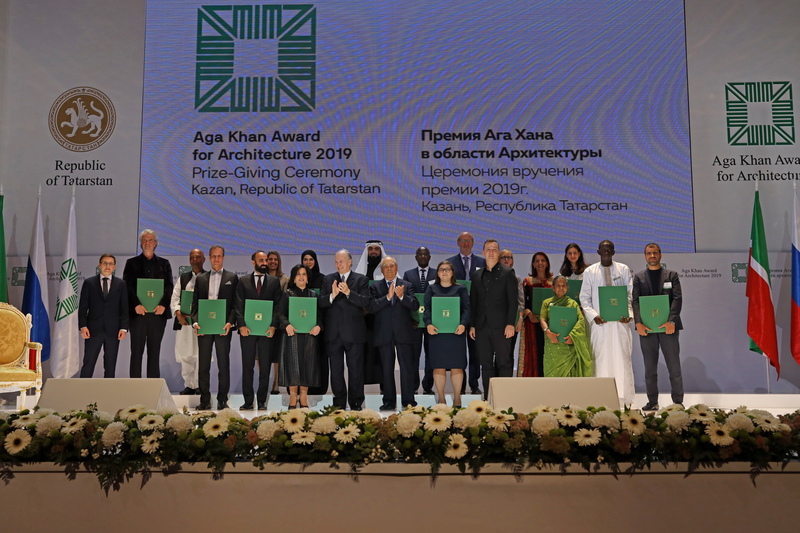 AKIPRESS.COM - The six winning projects of the 2019 Aga Khan Award for Architecture (AKAA) were acclaimed at a ceremony held at Kazan’s Musa Jalil State Academic Opera and Ballet Theatre on September 13. Mintimer Shaimiev, State Counsellor of the Republic of Tatarstan, accompanied His Highness the Aga Khan, hereditary Imam (spiritual leader) of the Ismaili Muslims, in presiding over the Award Ceremony.

The six Award recipients, spanning three continents, include an urban heritage intervention, a floating school, a national museum, an ambitious programme to introduce public spaces across hundreds of localities, a university’s classrooms and halls, and an ecological centre.

“You are implementing the largest charitable, educational and humanitarian projects, support proactive, creative people, regardless of nationality or confession, said Mintimer Shaimiev in acknowledging the contribution of His Highness. “Your peacekeeping mission, your commitment to bringing civilisations closer and achieving unity in diversity are consonant with our goals, especially to me, as the UNESCO Special Envoy for Intercultural Dialogue.”

Speaking at the ceremony, His Highness the Aga Khan noted that on this visit to Tatarstan, he had seen “how committed people can honour the power both of cultural identity and cultural pluralism.”

“It is striking to see how churches and mosques, for example, have been built and preserved right next to one another as powerful symbols of a profound intercultural dialogue,” he said. These were examples, the Aga Khan explained, of what the world was in particular need of today, as we seek to meet accelerating environmental, social, technological, economic and political challenges.

The Award Ceremony was attended by Eleonora Valentinovna Mitrofanova, the Ambassador-at-large of the Ministry of Foreign Affairs, other government officials, ambassadors and members of the international diplomatic corps, and leading members of the architectural community from around the world.

Speaking about the theme of “Architecture in Dialogue”, which emerged from this 14th cycle of the Award, the Aga Khan explained the potential of the architectural world to inspire and enrich creative dialogues, embracing diverse and even divergent perspectives. “The rich architectural dialogue we seek to foster should include a renewed respect for the diversity of Islamic cultures themselves,” he said. It was also necessary, he added, to foster a dialogue with non-Islamic cultures including diverse religious traditions. “Architecture can lead the way in this effort – as we listen to one another and learn from one another across old divides.”