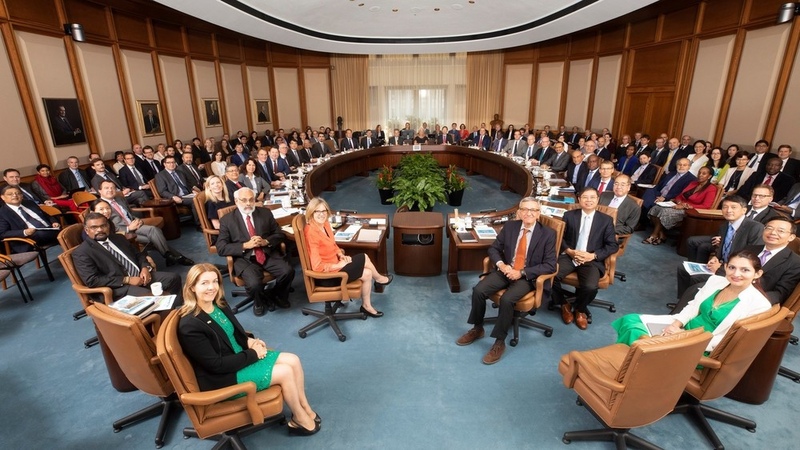 AKIPRESS.COM - On September 11, 2019, the Executive Board of the International Monetary Fund (IMF) concluded the Article IV consultation with Mongolia, the IMF said in press release.


Mongolia’s economy has recovered vigorously from the recent downturn. Economy growth accelerated to 8.6 percent in the first quarter of 2019, over fiscal balance turned into surplus in 2018, and gross international reserves have increased by $2½ billion since 2016. The recovery stems from a stronger policy framework, significant official financing and a rebound in external demand. Notwithstanding the progress, Mongolia remains vulnerable to external shocks given its high debt levels and the economy’s dependence on mineral exports.

Structural reforms progressed in several key areas: the budget process is more resilient to political pressure and quasi-fiscal activities were curtailed. To achieve sustainable and inclusive growth, it is necessary to advance the current reform efforts by strengthening the rule-based fiscal policy framework, ensuring financial sector soundness and improving governance.

Economic outlook remains strong despite some headwinds. Growth is expected to remain above 6½ percent in 2019 and moderate to around 5-6 percent over the medium term. The primary headwinds are weaker export growth and slower credit growth. Partially offsetting these headwinds, fiscal policy is expected to loosen in 2019 and 2020 relative to the 6 percent primary surplus seen in 2018. The moderation in growth will contribute to a reduction in the double-digit current account deficit and allow inflation to converge toward the target of 8 percent. Projected strong FDI and improving current accounts will support further reserve accumulation, but the trend will likely be reversed from 2021 onward due to looser domestic policies, the end of large-scale concessional financing from donors, and continued reluctance to allow exchange rate flexibility.

Risks are tilted towards the downside in the near-term. Shocks to mineral demand can lead to sharp fall in exports, weakening growth outlook and fiscal accounts. A slowdown in growth could trigger financial instability given still inadequate capital buffers at some banks and over-indebted households. Current fiscal and external buffers are still inadequate in the event downside risks materialize. On the upside, successful completion of the OT investment and key infrastructure projects could boost investor confidence, improve productivity, and attract FDI on new mining projects.

Executive Directors welcomed Mongolia’s economic recovery underpinned by the Fund-supported program. Growth has been robust, the fiscal balance has improved, and gross reserves have increased. However, Directors noted that the economy remains vulnerable to external shocks with still high debt and exposures to shifts in commodity demand. They emphasized the need for continued strong commitment to sound macroeconomic policies to increase buffers, reduce vulnerabilities, and achieve high, inclusive, and green growth. Directors encouraged the authorities to take measures to complete financial sector reforms to enable the completion of the sixth review of the EFF-supported program.

Directors underscored that fiscal policy should remain tight to bring public debt down to a safe level. For the near term, they welcomed authorities’ plan to save any revenue over-performance in 2019 and underscored the need to pass a prudent budget for 2020. Directors encouraged the authorities to streamline the fiscal framework with a more independent Fiscal Council. They emphasized that priority also needs to be given to better address core social challenges, including by ensuring sufficient health spending for the most vulnerable. To further reduce risks around public debt, Directors encouraged the authorities to proactively address large near-term rollover needs on external debt.

Directors underscored that monetary policy should focus on anchoring inflation and addressing external imbalances. They advised the authorities to remain vigilant and further tighten the policy stance if necessary. Directors mostly considered that a more flexible exchange rate would be helpful in addressing external imbalances and building reserves.

Directors encouraged the Bank of Mongolia to continue to build reserves and do so through direct purchases and limit sales of foreign exchange to address disorderly market conditions.

Recognizing the challenges identified by the recent forensic audit of capital raising transactions, Directors called for measures to address the shortfall identified by the Asset Quality Review. They called for a prompt response by the Bank of Mongolia in line with commitments made under the program. Directors also called for further efforts to facilitate the resolution of non-performing loans and improve the AML/CFT framework.

Directors emphasized that structural reforms should focus on strengthening governance and diversifying the economy. They encouraged the authorities to improve infrastructure, enhance the legal framework and the investment climate, reduce environmental degradation, and make the agriculture sector more resilient to climate change.