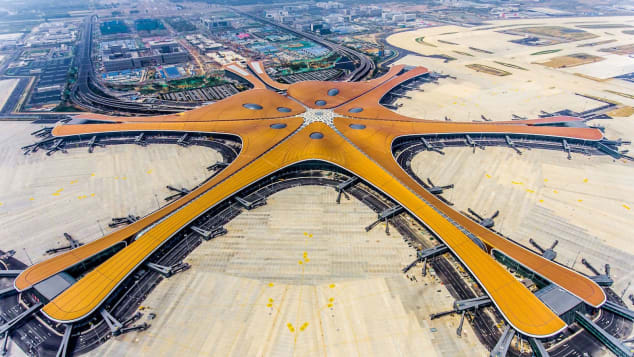 AKIPRESS.COM - China is poised to open a new mega-airport to the south of Beijing, already home to the world's second-busiest aviation hub, ahead of the 70th anniversary of the People's Republic, CNN reports.

Beijing Daxing International Airport (PKX) will see its first commercial flight take off around September 20, according to Chinese state media, with main tenant China Southern planning to deploy an Airbus A380, the world's biggest airliner, for the maiden journey.

The greatly anticipated airport ushers in a new era for air travel to and from the Chinese capital, which has been in desperate need of a second global gateway.

In 2018, more than 100 million travelers passed through its three terminals -- making it only the second airport in the world to cross that passenger traffic milestone, after Hartsfield-Jackson Atlanta. China is projected to overtake the United States as the world's biggest air travel market by 2022.

The multibillion-dollar Daxing, designed by the late architect Zaha Hadid and her Chinese partners, is built for the future, boasting four runways and a terminal the size of 97 soccer pitches upon opening of the first phase -- as well as customer-service robots that will provide travelers with flight updates and airport information.

The "modest" initial operational target is to accommodate 72 million passengers and 2 million tons of cargo annually by 2025. The ambitious master plan calls for the building of a total of seven runways, and moving at least 100 million passengers and 4 million tons of cargo a year through the airport.
Construction for the $11.5 billion project began in 2014, with more than 40,000 workers on site at its peak. The terminal bears all the hallmarks of Hadid's signature contour lines, with plenty of natural light shining through its more than 8,000 distinct rooftop windows.