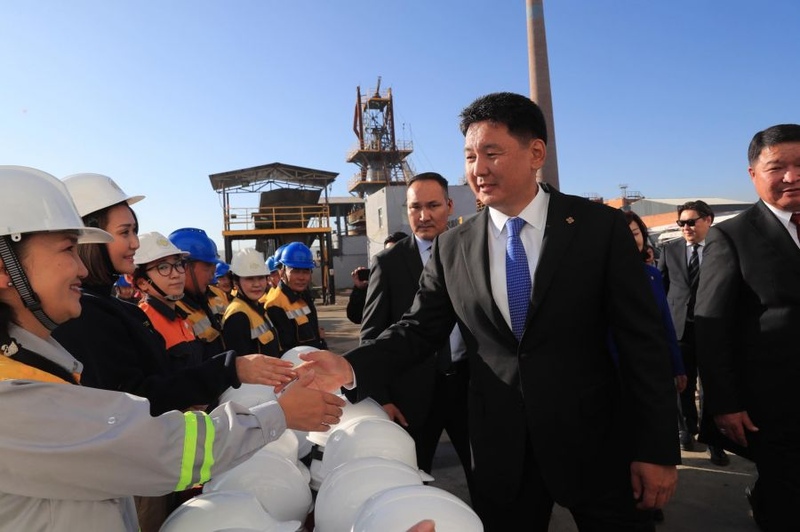 He started his working trip in Orkhon province with visits to the apartment construction project in Erdenet city, Erdenet Science and Technology Park and ‘Beren Metal’ metallurgical plant.

The EMC also announced 2019 as a year of investment, aiming to reduce production cost and increase economic profits. Within the framework of this objective, projects to increase reserves, introduce new technologies in the open pit mine, build an extension of concentrate plant and copper smelting plant are planned. Another project is extension of turbo generator of the Erdenet Thermal Power Plant financed from the soft loan of the Government of China.

Noting that Mongolia is willing to ensure its energy consumption with domestic production, PM U.Khurelsukh requested to complete the planned works on time. Furthermore, he ordered the authorities of the EMC to study and settle the issues concerning the engineering network of the apartment construction project in Erdenet city.

During his working trip to Orkhon province, he held a meeting with local citizens and gave update on policies and future plans of the government. PM U.Khurelsukh underlined that package law on tax is to be put into effect with a view to keeping salaries and pensions pace with inflation rate, supporting business entities and promoting domestic manufacturing. Last but not least, the Prime Minister informed about the decision to build a flood control dam in Erdenet city with USD 14 million soft loan and assistance of the European Bank for Reconstruction and Development.

Following his working trip to Orkhon province, Prime Minister U.Khurelsukh departed to Bulgan and Khuvsgul province, where he took part in the meetings with the local citizens. Accompanied by Minister of labor and Social Protection S.Chinzorig, Minister of Health Sarangerel and Member of Parliament J.Bat-Erdene and other officials, he delivered a presentation on the government activities and measures directed at the development of the rural areas of Mongolia and solved some requests put forward by local residents.