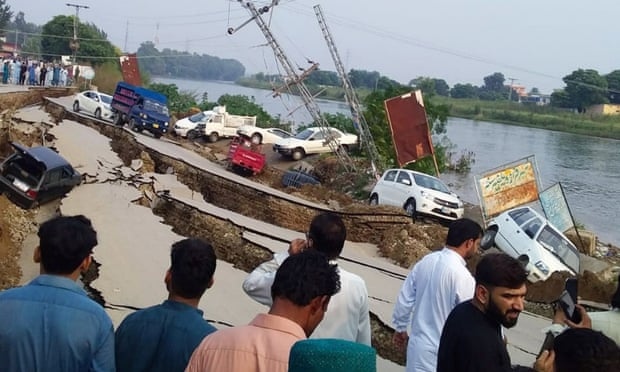 
The quake sent people in Lahore and Islamabad running into the streets. With rescue operations expected to continue overnight, residents in the worst-hit areas described their horror as walls collapsed and houses fell.

The epicentre of the 5.2-magnitude quake was near the city of Mirpur, 22 kilometres (14 miles) north of the city of Jhelum along the boundary separating the agricultural heartland of Punjab province and Pakistan-administered Kashmir, the US geological agency, USGS, said.

The larger Kashmir region is a disputed and troubled territory with separate Indian and Pakistani regions. Mirpur is in the Pakistani-administered region, which is nominally self-governing.

On one of the district’s two main roads, AFP reporters could see cracks at least four feet (1.2 metres) deep, some filling with water from a nearby canal. Television images showed cars wedged in to some cracks, while a bus and a truck lay by the side of the road.

In the village of Sahankikri, on the outskirts of Mirpur, residents said almost all the 400 houses were damaged.