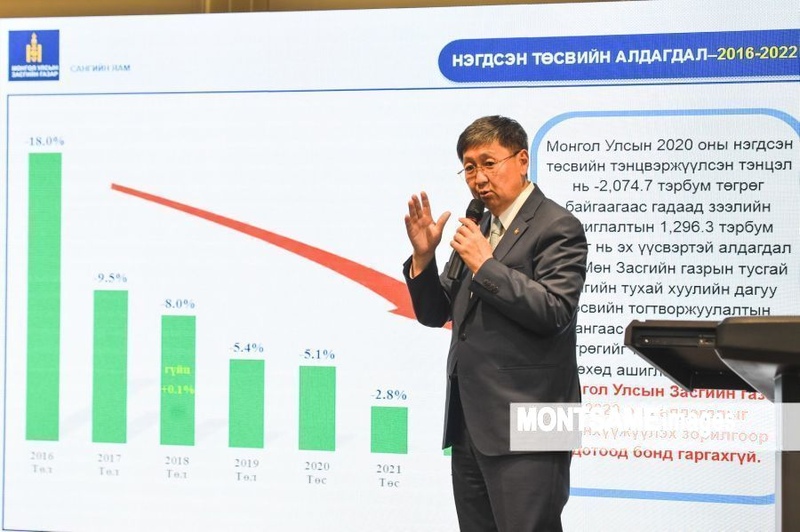 AKIPRESS.COM - Minister of Finance of Mongolia Ch.Khurelbaatar on September 27 delivered a media presentation on bills on state budgets of Mongolia for 2020, which have been submitted to the Parliament for discussion, Montsame reports.


Total budget revenue for next year is estimated at MNT 12.9 billion and total expenditure at MNT 13.8 billion. Taking into the consideration the total equilibrated revenue of MNT 11.7 billion from sources of tax revenues, nontax revenues, revenues from assistance, stabilization fund, future heritage fund as well as total expenditures, which include salaries, pensions, social benefits, subsidies, loan interest payment, investment, expenses of products and services, repayments of loans, the state budget balance is expected to fall short of MNT 2 trillion, which equals to 5.1 percent of GDP.

However, the Finance Minister Ch.Khurelbaatar noted that the state budget is likely to show profitability from 2023 and the government is taking measures to reduce budget deficit gradually so that business entities and citizens are not affected.

The economic growth for next year is projected at 7-8 percent (economic growth was 7.2 percent and 7.3 percent in the first half of 2019) and inflation rate to remain the same as this year at around 8 percent. According to Finance Minister, domestic risks to the state budget performance are the possibility of Mongolia being included in an international financial grey list, drop in mineral commodity price and a risk of severe wintering.

Some key highlights from the projected state budget for 2020 are;

- Tax refunds to be issued every quarter

- In terms of mining commodities, a total of 42 million tons of coal to be sold (coal energy at USD 75 and coking coal at USD 125) and total of 1225 thousand tons of copper concentrate to be sold.

- MNT 160 billion for salaries is allocated to the budget for coordination of salary and inflation rate.

- MNT 5.4 billion to be spent for “Healthy Teeth” program.

- MNT 30 billion for rebuilding the Grand Theatre of National Arts

- MNT 20 billion for the participation in the Tokyo Olympics

- MNT 15 billion for development of Industrial Park of Darkhan