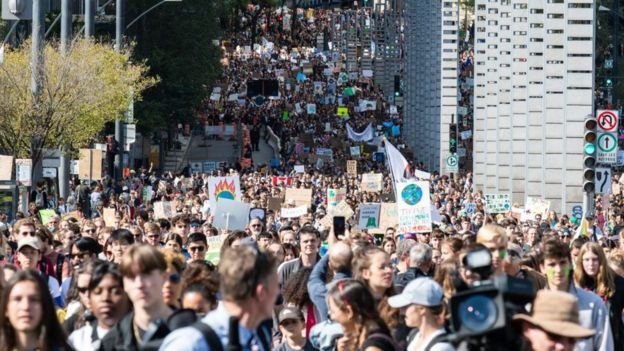 AKIPRESS.COM - Hundreds of thousands of people have joined climate strike marches across Canada, with almost 100 events planned in cities and towns, BBC reports.


Protesters are taking part in the global climate strike movement, which has seen people around the world take to the streets.

The 16-year-old - who on Monday chastised world leaders at the United Nations over their failure to do more - spoke in Montreal at the start of strikes in the city, which are expected to draw more than 300,000 people.

During her visit, Ms Thunberg will receive the key to the city from Montreal Mayor Valérie Plante.

Organisers say half a million people have gathered in the eastern city of Montreal alone. Officials told local media the number was closer to 315,000.

These figures place the Montreal event among some of the most attended environmental marches in history. The September 2014 People's Climate March in New York attracted at least 310,000.