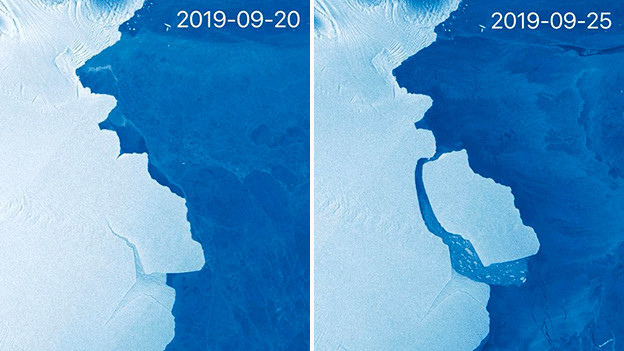 AKIPRESS.COM - A gigantic iceberg about the size of greater London has calved from the Amery ice shelf in east Antarctica, The Guardian reports citing expert monitors.

The tabular iceberg, officially named D-28, separated from the ice shelf on 26 September. The iceberg is 1,636 square kilometres in size, or about 50 x 30km, the Australian Antarctic Division said.

Ice shelves are platforms of floating ice that form where the Antarctic ice sheet meets the ocean. Working in a similar way to architectural buttresses, they hold back the flow of the grounded ice.

The Amery ice shelf has an estimated floating ice area of 60,000 sq km and water penetrates over 550km underneath it.

It is the first major calving event on the Amery ice shelf since 1963-64 although scientists said they did not believe it was linked to climate change.

The calving occurred next to a location known as the “loose tooth” that scientists had been watching because the ice appeared to be precariously attached.

Scientists from the Australian Antarctic program, the Institute of Marine and Antarctic Studies and Scripps Institution of Oceanography have been monitoring the site for almost 20 years.