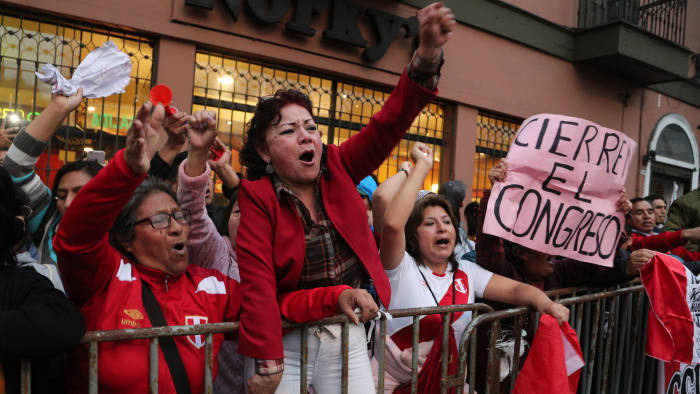 AKIPRESS.COM - The president of Peru has ordered the dissolution of congress and called for parliamentary elections, but in a stunning challenge to his rule his own vice-president declared the move “illegal” and “unconstitutional” and had herself sworn in as temporary leader, Financial Times reports.


In a day of high drama in the congress building in Lima and on the streets outside where thousands of people gathered to protest, Martín Vizcarra said he had made the decision because Congress had constantly blocked his attempts to pass anti-corruption legislation.

His opponents were furious and condemned the move as a coup. “We have to denounce it before the world,” said Jorge del Castillo, a parliamentarian. “We call on the armed forces of Peru, we call on the national police of Peru, not to lend their support to this coup d’état. He and his ministers will end up in prison.”

Opposition members of congress refused to leave the chamber and drew up plans to impeach Mr Vizcarra, who has been locked in a bitter battle for the past year over reforms to the political system and judiciary. He says his proposals were necessary to stamp out endemic corruption but his opponents insist he is trying to seize more power and is trampling on Peru’s democratic institutions.

Members of congress stayed put and Mr Vizcarra’s vice-president Mercedes Aráoz entered the chamber. After a vote to suspend the president, she was sworn in as his temporary replacement.