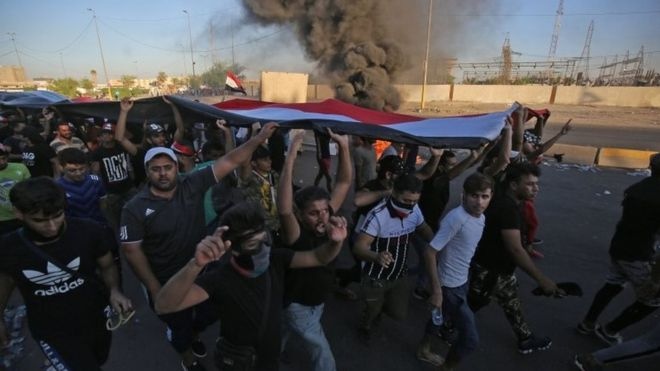 AKIPRESS.COM - The death toll in anti-government protests that have swept Iraq the past four days has soared to at least 60, security and medical sources say, BBC reports.

The figure has more than doubled in the past 24 hours, as clashes between protesters and police intensified.

Despite the prime minister's plea for patience, Iraqis continued to throng the streets in their hundreds on Friday. An indefinite curfew imposed by authorities in the capital, as well as an internet blackout, also failed to prevent protesters from gathering.

According to Reuters, security forces were seen firing live rounds at protesters trying to reach Tahrir Square in the capital Baghdad - where much of the unrest has been focused.

A Reuters reporter on the ground said several people had been hit by bullets, some in the head and others in the stomach.

At least 10 people were killed there on Friday alone, according to medical and security sources.

This is said to include the four Iraqis - two civilians and two officers - shot by sniper fire in central Baghdad, according to security forces.

At least 60 people have died, including six members of Iraqi security forces. Hundreds more have been wounded.

Much of the violence has been concentrated in Baghdad and majority Shia Muslim areas in the south, including Amara, Diwaniya and Hilla. A number of deaths were reported on Friday in the southern city of Nasiriya, about 320km (200 miles) away.