Coronavirus in Kyrgyzstan
Support Subscribe Log in
KyrgyzstanKazakhstanMongoliaTajikistanTurkmenistanUzbekistanWorld
art & entertainmentbusinesseconomyeducationenvironmentfinanceforeign policyhealthjustice & crimelifeopinion & analysispoliticssciencesporttechnologytravel
World|life|October 8, 2019 / 04:14 PM
11 elephants died after falling down a waterfall in Thailand while presumably trying to save a baby elephant 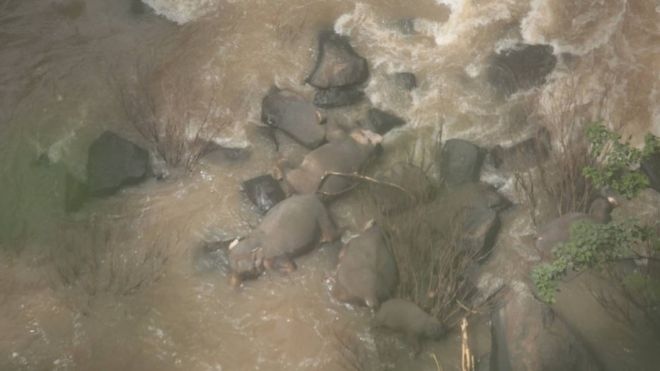 AKIPRESS.COM - The number of elephants that died after falling down a waterfall in Thailand has increased to 11, BBC reports.


It is thought the animals may have been trying to save a baby elephant that slipped over the edge.

Local authorities at the Khao Yai National Park in central Thailand initially spotted only six dead elephants over the weekend.

The additional five were spotted by drone near the notorious fall known as Haew Narok (Hell's Fall).

The dead elephants included a three-year-old calf, park officials said at the weekend, according to the Reuters news agency.

"We understand that the elephants were trying to cross over to the other side of the river," local official Badin Chansrikam told the agency.

"Probably, one of the smaller elephants might have slid and the adult ones were trying to rescue them but instead, were swept away by the water."

According to local media though, the reason the animals fell into the strong current is not known.

When the first six dead animals were discovered at the weekend, two surviving elephants were found struggling on a rock.