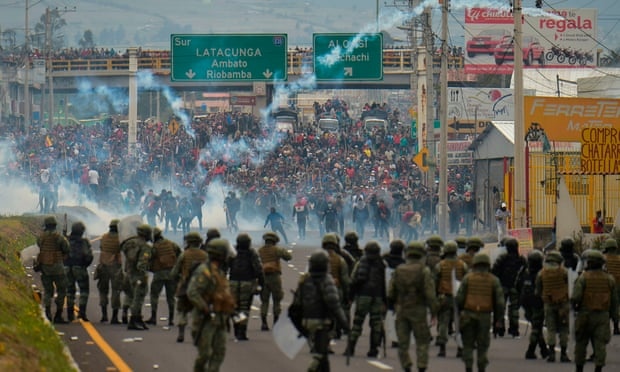 AKIPRESS.COM - Ecuador’s president, Lenín Moreno, has said he has moved his government from the capital in Quito to the coastal city of Guayaquil amid violent protests over the end of fuel subsidies.

Images from Quito showed protesters hurling petrol bombs and stones, ransacking and vandalising public buildings as well as clashing with the police in running battles late into the night.

Moreno, 66, who has moved away from the leftwing policies of his predecessor and one-time mentor Rafael Correa, has said he will neither tolerate disorder nor overturn the scrapping of fuel subsidies as part of a package of austerity measures.

Moreno accused political opponents of orchestrating an attempted coup and blamed associates of Correa of infiltrating the protests as part of a plot to topple his government, without providing evidence.

The petrol and diesel subsidies had cost the country close to US$1.4bn (£1.1bn) annually, according to official sources. They were lifted last Tuesday as part of a US$4.2bn loan deal with the International Monetary Fund reached last year that hinges on belt-tightening reforms, The Guardian reports.

As of Tuesday, 570 people had been detained. Two dozen police officers have been injured and a man died when he was hit by a car but an ambulance was unable to reach him due to the demonstrations, said the government.