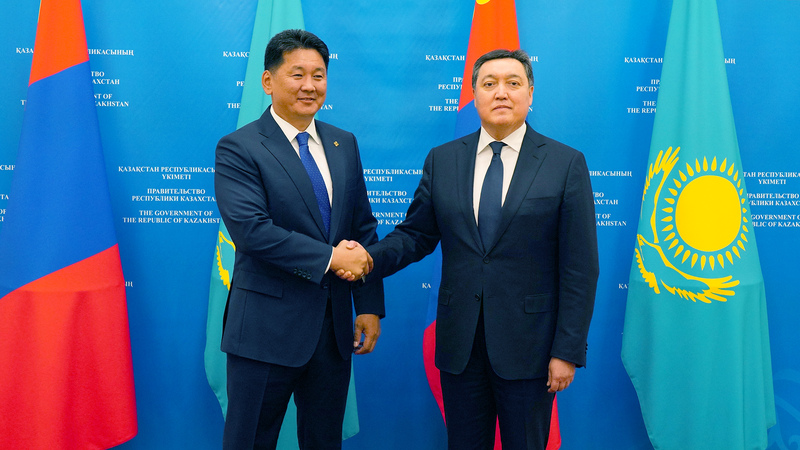 
The sides discussed issues of further development of cooperation in trade, economic, transit and transport, agricultural, mining, cultural and humanitarian spheres, as well as interaction within regional and international organizations.

“We are interested in the further development of cooperation between our peoples and states and bringing it to a qualitatively new level,” the Mongolian side  said.

The PMs noted the significant potential for further building up mutual trade turnover, which amounted to $80 million in 2018.

Particular attention was paid to the prospects for cooperation in the mining industry, construction, processing and production of finished products of animal husbandry, cashmere, leather, and deepening cooperation in the transit and transport sector, including the activation of communications between the two countries under the SCO Agreement on the creation of favorable conditions for international road transport.

Mamin suggested developing a draft Roadmap for enhancing trade and economic cooperation between the Republic of Kazakhstan and Mongolia for 2021-2024.

He emphasized that the Kazakh diaspora of Mongolia acts as an important connecting factor in relations between Nur-Sultan and Ulan Bator – over 120 thousand Kazakhs, of which 90 thousand live in the Bayan-Ulgiy aimag.

Following the results of negotiations in the presence of the PMs of the two countries, the following series of documents were signed:

- Protocol on amending the Agreement between Kazakhstan and Mongolia on mutual legal assistance in civil and criminal matters of Oct. 22, 1993;

- Intergovernmental agreement on cooperation in the field of combating terrorism;

- a memorandum in the field of veterinary control and supervision between the Committee of Veterinary Control and Supervision of the Ministry of Agriculture of Kazakhstan and the Main Veterinary Directorate – Executive Agency of the Government of Mongolia;

- agreement on the establishment of twinning relations between Nur-Sultan and Ulan-Bator;

- An agreement on cooperation between the Institute of Plant Growing and Agriculture of Mongolia and the Scientific and Production Center for Grain Management named after Barayev.

Within the framework of the official visit of the PM of Mongolia to Kazakhstan, a Kazakh-Mongolian business forum with the participation of representatives of business circles of the two countries, a visit to the Astana International Financial Center and the International Center for Green Technologies are planned.