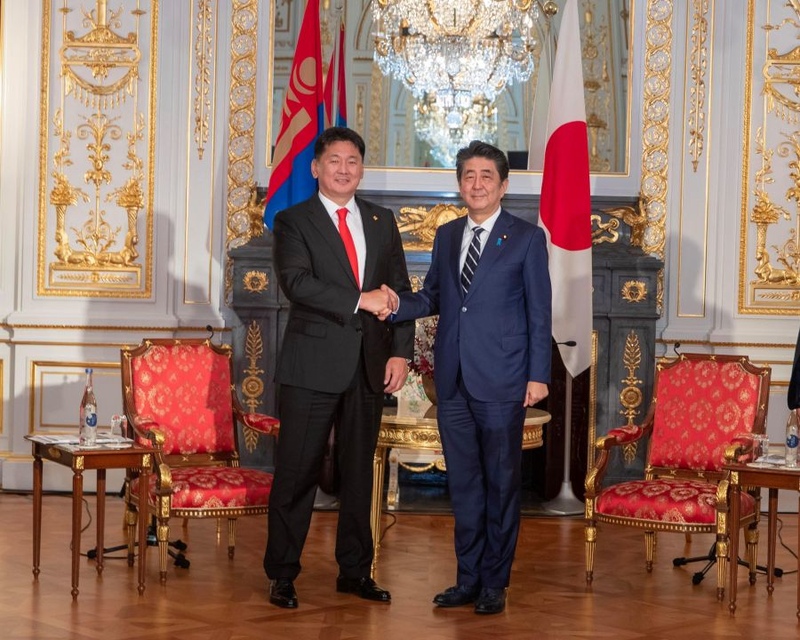 AKIPRESS.COM - Prime Minister of Mongolia Ukhnaagiin Khurelsukh, who is now in Tokyo to attend the enthronement ceremony of Emperor Naruhito, was received by his Japanese counterpart Shinzo Abe on October 21, Montsame reports.


Shinzo Abe expressed his gratitude to the Government of Mongolia for the condolence message for the victims of Typhoon Hagibis and rendering humanitarian assistance. He said that he is satisfied with ongoing successful realization of issues discussed during last year’s visit of Mongolian Prime Minister to Japan.

TheJapanese PM also said that the Japanese government is ready to render second phase fiscal assistance after Mongolia makes proper changes in its monetary policy and resolves some banking and financial difficulties.

For his part, Prime Minister Khurelsukh expressed gratitude to the Japanese government and the people for its continued support to all sectors of Mongolia since the time of transition to market economy. “Mongolia reaffirms its support for Japan’s active peaceful foreign policy and the ‘Indo-Pacific’ regional concept developed by you. Mongolia is willing to expand bilateral Strategic Partnership relations in all sectors, in particular to co-implement large projects and programs of economic cooperation which could become symbol of friendship of the two countries,” emphasized Khurelsukh.

Moreover, Khurelsukh said that the country is for intensifying bilateral cooperation in physical culture and sports, expressing his hope that Japanese will organize Olympic and Paralympic Games Tokyo 2020 successfully. The Prime Minister also conveyed Mongolian President’s greetings to Shinzo Abe.