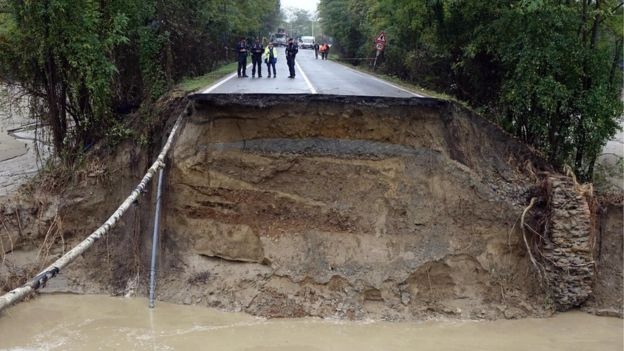 AKIPRESS.COM - A man's body has been found and five people are missing after flooding hit parts of north-east Spain, BBC reports.


Among the missing are a woman and her son, who were inside a mobile home when the River Francolí burst its banks and washed it away.

Flash floods in northern Italy left two people dead on Tuesday and roads in the south of France were blocked as rivers burst their banks.

Parts of Narbonne Plage and Béziers were inundated by floodwater.

Ten departments in southern France were placed on orange alert. Cars were submerged and the waters of the River Orb rose dangerously beneath a historic bridge in Béziers as the town saw 198mm (nearly 8in) - or the equivalent of two months' average rainfall - in just six hours on Wednesday morning.

The north-east Spanish region of Catalonia suffered its second period of torrential rain in two months.

Police found an empty car in the flooded River Francolí on Wednesday and were trying to find out if it belonged to the missing pair.

A fifth person, from Belgium, was also reported missing when his lorry was found in the same river at l'Espluga de Francolí.

The area around Tarragona was among the worst affected. The roof of the baroque church at Savallà del Comtat caved in.

A seven-year-old girl was among three people hurt when torrential rain swamped a campsite near Barcelona.

Meteorologists blamed the torrential rain on a cold front known as a high-level isolated depression.