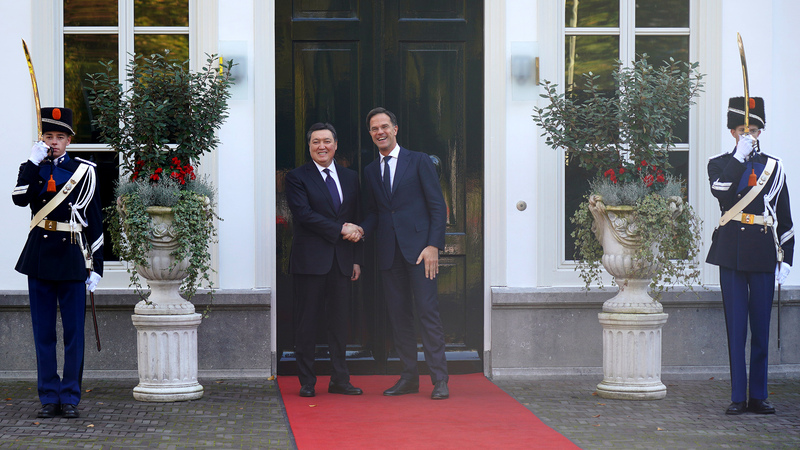 
The sides at the meeting discussed development of trade, economic and investment cooperation, interaction in the energy, financial, transport and logistics, agricultural, IT and scientific fields.

The Netherlands is one of the key trade, economic and investment partners of Kazakhstan in Europe. Over the years of independence, the gross inflow of direct investment from the Netherlands to Kazakhstan exceeded $92 billion. Over 900 enterprises with the participation of Dutch capital operate in Kazakhstan. At the end of 2018, bilateral trade amounted to $6.5 billion.

In turn, Mark Rutte expressed his confidence that the official visit of the Prime Minister of Kazakhstan to the Netherlands would give a significant impetus to the further development of bilateral cooperation.

The PMs attended the opening of the V Kazakhstan-Netherlands Business Forum, in which five documents were signed in the presence of the heads of government of the two countries:

- the agreement between the Kazakh company K-Agro and the Dutch Farm Frites on the creation of a joint venture for the production of French fries in the Zhambyl region. The project is worth $145 million;

- the agreement between JSC NC Kazakhstan Garysh Sapary and the NEASCO group of companies on cooperation on the implementation of projects on Earth remote sensing and geographic information systems;

- the memorandum between the Kazakh National Agrarian University and the University of Wacheningen on cooperation in training Kazakhstani agricultural students. Wacheningen University is one of the world's leading centers in the field of natural sciences, natural resource management, crop production and livestock raising;

- the memorandum between JSC Housing and Utilities Center and Witteven + Bos on mutual understanding on the implementation of the program on the construction and reconstruction of sewage treatment facilities;

- the memorandum between Dal Agro Park and Dutch Greenhouse Delta on cooperation on the construction of an agricultural park in the Turkistan region on 200 hectares.