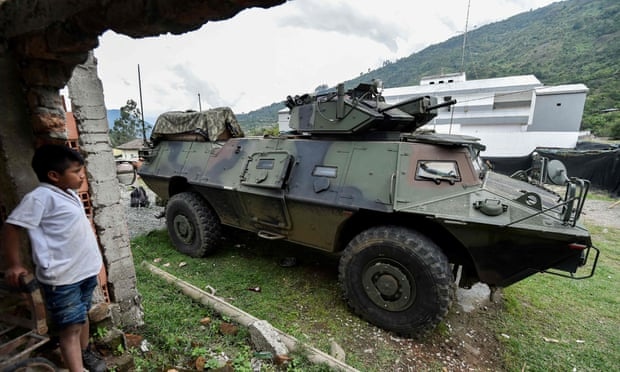 AKIPRESS.COM - Colombia’s government has launched a military offensive to hunt down the gunmen responsible for the massacre of five indigenous leaders in the south-western province of Cauca.

The president, Iván Duque, travelled to the region on Wednesday along with his defence and interior ministers to condemn the massacre and oversee operations to root out armed groups that plague the conflict-ridden Cauca province, The Guardian reports.

The government blamed dissident factions of the Revolutionary Armed Forces of Colombia (or Farc), a now-demobilised leftist rebel group, for the attack on Tuesday, in which assailants threw grenades and opened fire on a convoy of armoured SUVs carrying the indigenous leaders.

Among the victims was Cristina Bautista, the leader of the semi-autonomous Tacueyó reservation and her unarmed indigenous guardsmen. Six other people were wounded in the aftermath, as the attackers fired on an ambulance that arrived at the scene.

An initial investigation suggested that the massacre came in response to the capture of three Farc dissidents by local indigenous guardsmen.

“Clearly, here we have a longstanding threat of drug trafficking groups, and of dissidents, who want to intimidate the population,” Duque told reporters from the nearby town Santander de Quilichao. “I hope to make some important announcements about operational capacity in the region and the capacity we will have to face these threats.”