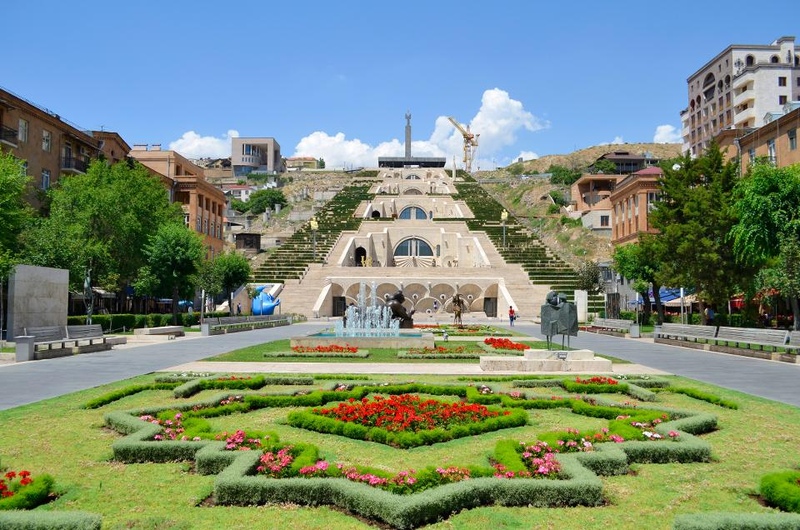 Nicknamed the ‘pink city’ because of the color of volcanic tufa rock from which many buildings are constructed, this is a city where strolling allows you to see plenty, Forbes said. (Statistics from mid-2019 indicate that the city is comparably as safe as Reykjavik or Helsinki.)

Begin at the Cascade Complex, a massive limestone stairway built in 1980 that joins two segments of the city. This also houses an arts center and more than a half dozen internal escalators for those not wanting to climb the 500 plus steps on foot. The journey is punctuated by five levels with rest points from where you can view the city, and the associated architecture when lit up at night is especially attractive.

Before the Cascade is a statue of Alexander Tamanian (1878-1936) an architect who moved to Yerevan to create a plan for the modern city (highlighted in stone relief on ground adjacent to his statue). He also designed the city’s opera house.

From the base of the Cascade walk past the adjacent, handsome Armenian Opera Theater. From there it’s a half hour walk to Republic Square, which is actually oval—bordered by parliament buildings, Shahumyan Park and ‘Singing Fountains.’ But on your way to this square, detour to stroll along Pushkin Street past Dolmama Restaurant—where an ancient grape vine still grows inside. Dolmama has hosted both Boris Yeltsin and Hillary Clinton (not, apparently, at the same time) as well as Gérard Depardieu, Michael Caine, George Clooney, the Prince of Wales, Kanye West, Julio Iglesias and other luminaries.