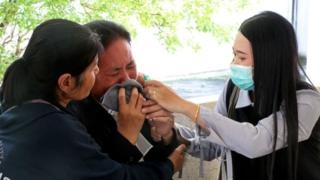 AKIPRESS.COM - Suspected separatists have killed at least 15 people and injured four in southern Thailand, in one of the country's worst attacks in years.

Police officers were among those killed at the attack on a security checkpoint in Yala province, BBC reports.

The attackers used explosives and then scattered nails on roads in an attempt to slow down people chasing after them.

Thousands have been killed in southern Thailand since a separatist insurgency gripped the region in 2004.

The attack took place on Tuesday night in the province in Yala - one of three provinces in the region that has often been hit by violence.

Separatist insurgents are believed to have targeted a security checkpoint, killing at least 15 people - including a police officer and numerous village defence volunteers.

These volunteers are usually civilians who have been trained to use weapons and are tasked with protecting the village.

Some of the injure remain critically ill, according to the BBC's Thai Service.

There is still no evidence as to who was behind the attack, but Colonel Pramote Prom-in, a regional security spokesman, told Reuters that it was "likely the work of insurgents".

"This is one of the biggest attacks in recent times," he said.