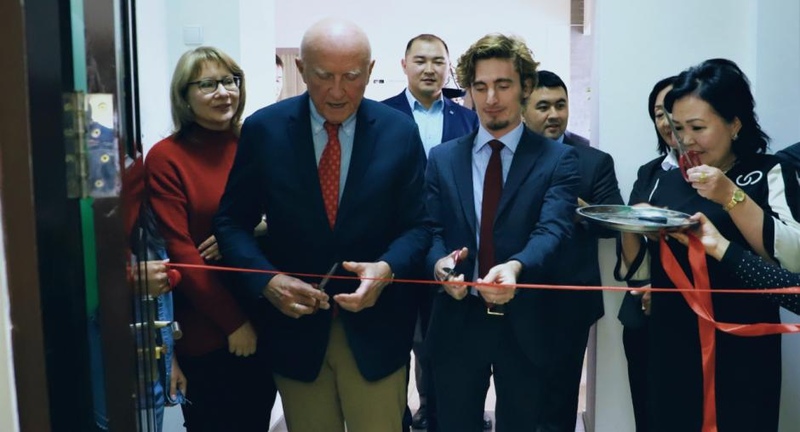 Eduardo Da Ros (r), Regional development officer of the OSCE Programme Office in Bishkek and Dr. Bohdan Krawchenko (l), Dean of the Graduate School of Development the University of Central Asia cut the ribbon and declare the 4th Aarhus Centre in Naryn ope

AKIPRESS.COM - The fourth Aarhus Centre in Kyrgyzstan officially opened on 5 November 2019 in Naryn. The new Centre is part of the co-operation between the OSCE Programme Office in Bishkek and the University of Central Asia, OSCE said.

The Centre will serve as a bridge between local governmental authorities and the local community in addressing the most acute environmental challenges in the Naryn region.

The official opening brought together representatives of local state authorities, environmental organizations, civil society and the local population of Naryn city. During the event, the participants expressed their interest in co-operating with the new Centre and proposed their ideas related to environmental protection in the Naryn region.

Co-operation between the Aarhus Centres in Osh (2004), Bishkek (2015) and Issyk-Kul (2017) have resulted in building networks and working together in a co-ordinated and effective manner with a wide range of stakeholders. The Aarhus Centres have been drawing public attention to a range of environmental problems, as well as providing a unique platform for dialogue among the public, civil society, local authorities, the media and relevant experts.

The Aarhus Centres were established to support the implementation of the United Nations Convention on Access to Information, Public Participation in Decision-making and Access to Justice in Environmental Matters, also known as the Aarhus Convention, signed in 1998. It has been ratified by 45 European and Central Asian countries. Since 2002 the OSCE has supported 60 Aarhus Centres in area of the OSCE participating States.