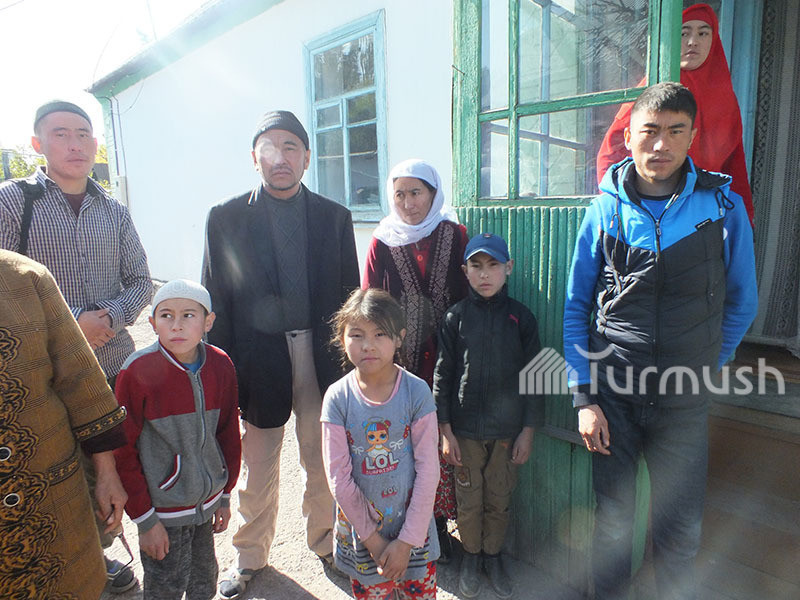 AKIPRESS.COM - A migrant in Russia donated his home in Jaiyl district, Chuy region to a family of Pamir Kyrgyz.

A family of Pamir Kyrgyz has nine children. The family now lives in the village of Kalininskoye. They had to move from Naryn region to Chuy. They have already been registered with the local administration and their children will go to school and kindergarten.

Kyrgyz migrant working in Russia Kylych Turdukulov bought a house for himself, but after learning about the difficulties of a large family that moved from the Pamirs to their historical homeland on the Internet, he decided to donate his house to them.

"Kylych has been working in Vladivostok for 7-8 years and is busy with greenhouses. He has a wife and two children. He could not come personally and asked me as a neighbor to give them the keys to the house. People from Pamir didn't believe for a long time that they were gifted a house. They were very happy when they moved in after a year of moving from one place to another. The 53-year-old father and 46-year-old mother raise nine children. The oldest son is 30 years old, the youngest child is 3 years old, five children are of school-age. The wife is a disabled person," said a villager Sadykzhan Abdurakhmanov.

The father of the large Pamiri family, Abduvali Rashudi, said the oldest son stayed in the Pamirs. He has problems with his documents and was unable to travel to Kyrgyzstan with his family. They have all their belongings left in the Pamirs - the house, the cattle and the car. It was impossible to bring or sell it all.

"We travelled here for two and a half months without knowing what was waiting for us. And we couldn't sell our property, because no one would buy it there. First of all, people have no money. Secondly, why would they buy cattle and a house, if after our departure all this remains free of charge for them? We are helped by different services and ordinary people. In Naryn, we were given food, allowances, coal and firewood. Our children went to school. Here, too, we started to get help right away. But we do not want to do nothing at home, we need to find a job, because we are ashamed to ask people for help all the time. Now children will go to school, we will look for a job. People in Kyrgyzstan are very kind, hospitable and we're grateful to them for such a warm welcome and all the help they can give us," the head of the family shared his story.

Social workers from Jaiyl district brought material aid to the Pamir Kyrgyz family. "Four children of school age - 14, 10, 8 and 6 - are in this family. All of them will be engaged in a special program. But today there is a problem with older sons, who are 23 and 25 years old. They need work so that they can feed themselves and their families. But the thing is that they have no professional skills. They can only graze cattle, because in the Pamirs they were engaged only in cattle breeding." they said.

Modern Pamir Kyrgyz are descendants of the Kyrgyz who emigrated to Afghanistan between 1575 and 1930. They live in the mountains of the Big and Small Pamirs in difficult conditions, without access to education and health care. The Pamir Kyrgyz are considered to be one of the most enduring peoples in the world. Climatic conditions here are very severe. It is cold or very cold 340 days a year. The fierce winds blow there. It is impossible to grow anything. The main occupation of the Kyrgyz in the Pamirs is breeding of yaks, sheep and camels, which means meat, milk, clothes, and TV for them. The main monetary unit of the Pamir "currency" is a sheep. From time to time they come down from the mountains to exchange yaks for clothes and food. In such harsh conditions, deprived of the opportunity to be examined and treated by doctors, they die of diseases that are not fatal in Kyrgyzstan for a long time. They have high infant and maternal mortality rates. In addition, closely related marriages are common there. Many children are malnourished. The number of Pamir Kyrgyz is decreasing every year.

In total, there were 13 families of Pamir Kyrgyz in Naryn who came from the Pamir. Some 600 people remained in the Pamirs.