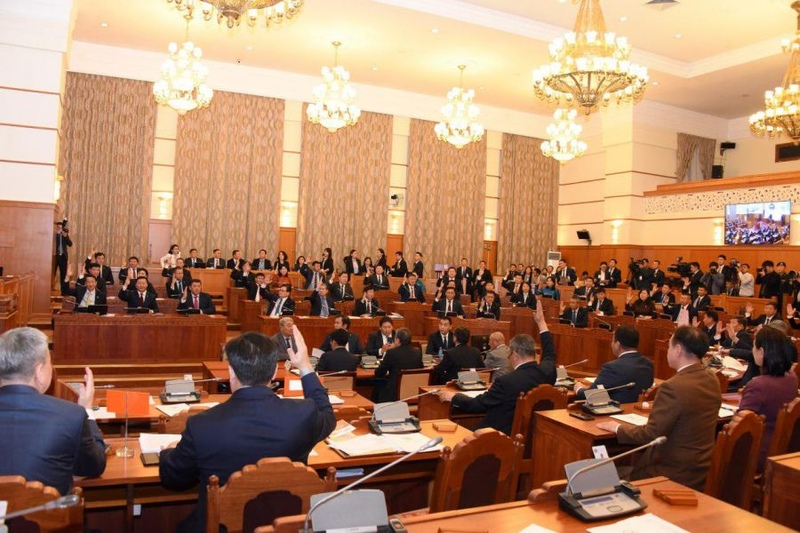 AKIPRESS.COM - Amendments to the Constitution of Mongolia, which had passed through the last three Parliaments of Mongolia, were adopted unanimously at the Parliament meeting on November 15, after gaining support of 63 members present and voting, Montsame reports.


The amendments are made in four different areas of parliamentary system and governance, executive power, enhancement of accountability of judicial systems and of local governance system.

Parliament Speaker G.Zandanshatar said “The four bills on amendments to the Constitution of Mongolia, carrying the people’s desire for better future, are now passing in parliament after being actively discussed at the last three parliaments. In the past three years, these amendments were high on agenda of the seventh Parliament of Mongolia, founded by the wills of the Mongolian people”.

According to the Parliament Speaker, since the amendments’ submission, nonstop parliamentary debate continued throughout the last summer. During this time, parliamentary plenary and standing committee meetings had spent a total of 105.9 hours on 36 series of discussions of the bills. Parliament members organized public discussions and presentations in nine districts of Ulaanbaatar city and 21 aimags of Mongolia and 306 thousand people expressed their opinions.

“In addition, the parliamentary debates have carefully considered more than 600 proposals delivered by government and nongovernmental organizations, political parties and scholars and academics. To put in other words, the amendments to the Constitution ensure the basis of public consensus, encompassing a wide range of participants” said G.Zandanshatar.

Accompanying the amendments, around 30 laws were changed, including Law on National Wealth Fund, Law on Courts, Law on Administrative and Territorial Units and their governance, Law on Elections and Law on Political Parties to build legislative reforms and the foundation to ensure justice and rule of law both in the state and the society.

The amendments to the Constitution will take effect on May 25, 2020.