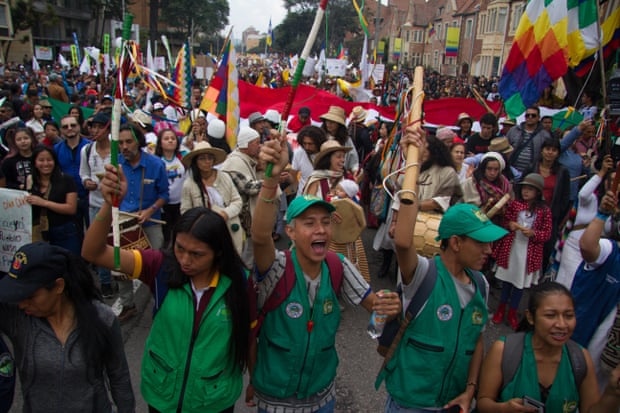 AKIPRESS.COM - Hundreds of thousands of Colombians have taken to the streets in a show of support for the country’s embattled peace process with leftist rebels – and to protest against its deeply unpopular government, The Guardian reports.

Pensioners, students, teachers and union members joined marches across the country in one of biggest mass demonstrations in recent years.

The marches began in Bogotá largely without incident, although a few clashes broke out near Bogotá airport between protesters and riot police around midday. As the rain cleared, more confrontations broke out across the city in the early evening. Explosions could be heard across the city. Teargas was fired in the Plaza de Simón Bolívar and at the campus of the National University, where protesters battled with security forces.

The national strike was prompted by proposed cuts to pensions weeks ago. Though the reform was never formally announced, it became a lightning rod for widespread dissatisfaction with the government of President Iván Duque, whose approval rating has dropped to just 26% since he took office in August last year.

Protesters also expressed anger at the perceived slow-walking of the rollout of the country’s historic 2016 peace deal with the leftist Revolutionary Armed Forces of Colombia (or Farc) rebel group. That accord formally ended five decades of civil war that killed 260,000 and forced more than 7 million to flee their homes.

Others say Duque has done little to protect social leaders and indigenous people, who are being murdered at alarming rates. Public fury has also been stoked by a recent airstrike against a camp of dissident rebel drug traffickers, which left eight minors dead.