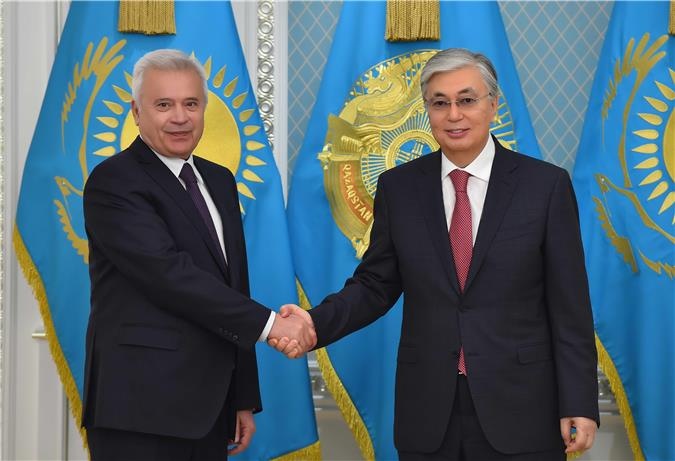 AKIPRESS.COM - President of Kazakhstan Kassym-Jomart Tokayev hosted President of LUKOIL Vagit Alekperov in the city of Nur-Sultan on December 10, the company reported..

The head of LUKOIL presented an updated report on the company's operations in Kazakhstan in 2019. The sides discussed the status and future development of Zhenis and I-P-2 offshore projects as well as opportunities to expand cooperation in future. Vagit Alekperov also talked about the first months of operation of LUKOIL's lube plant in the Almaty Region, commissioned in September of 2019.

Operating in Kazakhstan since 1995, LUKOIL is a party to Karachaganak, Kumkol, Tengiz projects and Caspian Pipeline Consortium.

The Ministry of Energy of Kazakhstan, national company KazMunayGas and LUKOIL concluded a contract on exploration and development of hydrocarbons at Zhenis block in April of 2019. A principles agreement on I-P-2 block between LUKOIL and KazMunayGas, signed at Saint-Petersburg International Economic Forum, followed in June of 2019. The two blocks are located in Kazakhstan's home waters of the Caspian Sea.

LUKOIL's lube plant in the Almaty Region, that provides employment for over two hundred people from Kazakhstan, local alumni among them, produces over eight hundred of lube items, including LUKOIL Genesis. A special brand of engine lubricants, developed with innovative molecular technologies, it received favorable reviews of the world's leading car manufacturers.