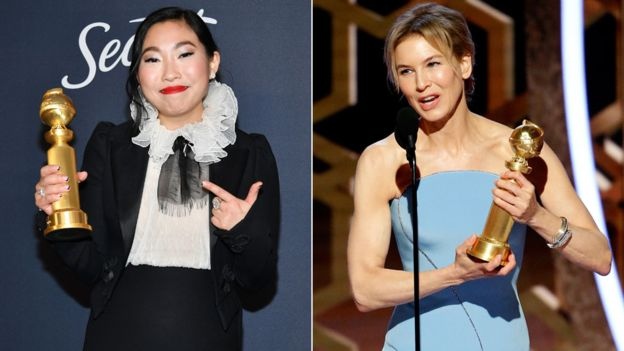 AKIPRESS.COM - British stars have had a golden night at a Golden Globes, where Australia's bushfires were the main talking point.

Once Upon a Time In Hollywood was the biggest winner overall, with Brad Pitt and Quentin Tarantino both recognised.

Mendes was named best director for 1917, which went on to be crowned best film drama at the end of the Los Angeles ceremony.

There was also success for Sir Elton and his songwriting partner Bernie Taupin, who won best film song for their Rocketman composition I'm Gonna Love Me Again.

Joaquin Phoenix was named best actor in a film drama for Joker, while Renee Zellweger won the female equivalent for playing Judy Garland in Judy.

Awkwafina was the other winner in the main film acting categories, winning best actress in a musical or comedy for The Farewell.

The actress and rapper - whose real name is Nora Lum - is the first woman of Asian heritage to win the award.

Earlier in the evening, there were two awards for Fleabag as Waller-Bridge was named best actress in a TV series (musical or comedy).

Claire Foy, Colman's predecessor on The Crown, also won a Golden Globe for playing The Queen in the Netflix drama.

Pierce Brosnan, whose sons Dylan and Paris are serving as this year's Golden Globe ambassadors, also sent a message of goodwill to those affected by the fires.

Cate Blanchett, meanwhile, paid tribute to the volunteer firefighters who are tackling the blazes.

Ricky Gervais, hosting the event for the fifth time, kicked off proceedings with a salty monologue that poked fun at James Corden, Martin Scorsese and others.

The two-time Oscar winner was briefly moved to tears as he paid tribute to his ever-supportive family.

There was no surprise, though, when perennial Globe favourite Laura Dern was named best supporting film actress for Marriage Story.

The Globes is the biggest ceremony of the awards season outside of the Oscars and many of its award recipients traditionally go on to enjoy success at the later event.Pierce Brosnan, whose sons Dylan and Paris are serving as this year's Golden Globe ambassadors, also sent a message of goodwill to those affected by the fires.