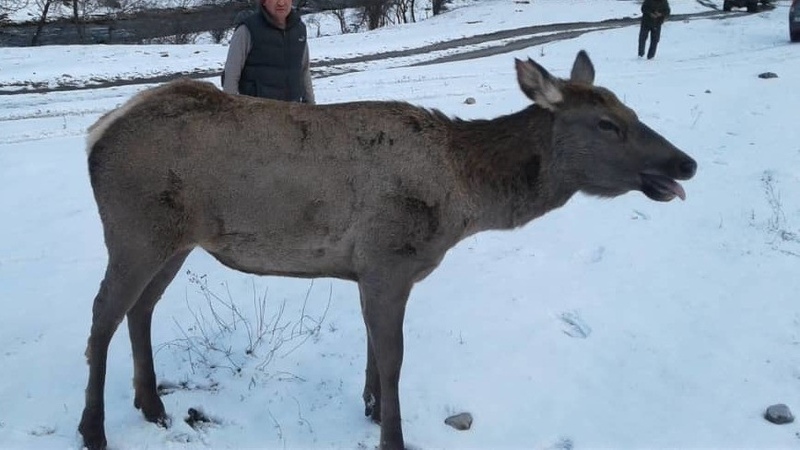 AKIPRESS.COM - Nine marals were re-introduced from the Naryn State Reserve to Aksy district of Jalal-Abad region. The marals adapted well on the territory of the Avletim forestry enterprise, the State Environmental Protection and Forestry Agency said.

Marals are under permanent supervision of the workers of the Agency. Two marals regularly enter into the Sary-Chelek biosphere reserve. One maral, which got accustomed to hand feeding, often comes to Tovar-Sai village. The Agency workers drive the maral back to the Avletim forestry range.

The marals are supplied with fodder.

In June 2018, nine marals were brought from the Naryn State Reserve to Baltyrkan reserve in Jalal-Abad region under Maral Re-Introduction to West Tian Shan Project.

The Project was initiated by Jamaat Alan-Too and carried out by the Environmental Protection and Forestry Agency with financial support of the Christensen Fund and Leonardo DiCaprio Foundation.

The aim of reintroduction was preservation and reproduction of marals and expansion of their range.

The animals were transported in special vehicles by workers of the Environmental Protection Agency, National Academy of Science and Veterinary Service of Kyrgyzstan.

Baltyrkan reserve lies on the territory of the Avletim forestry enterprise and borders with Sary-Chelek biosphere reserve with thick forest at the altitude of 2,000 m above sea level. The total area of the reserve is 504 ha and it is an ideal place for marals.

The Environmental Protection Agency says it will continue reintroduction of animals to other regions of Kyrgyzstan.