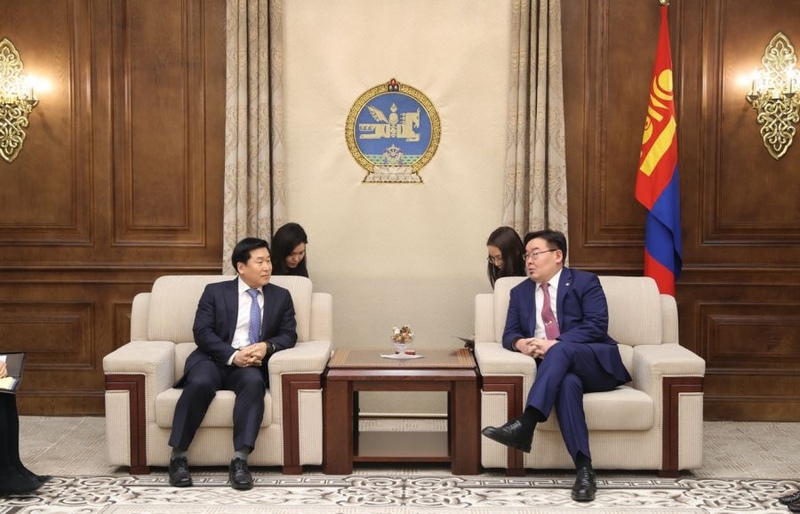 Zandanshatar congratulated the Ambassador on assuming his post in Mongolia. The Speaker expressed his delight with the development of Comprehensive Partnership between Mongolia and the Republic of Korea in all fields and the 30th anniversary of the establishment of diplomatic relations of the two countries, which is being marked this year, Montsame reports.

Ambassador Lee Yeo-hong said that it is an honor that his mission to Mongolia coincides with the historic anniversary, which he sees as an opportunity to develop relations of Mongolia and the Republic of Korea in every possible area.

Noting that the Republic of Korea is not only a third neighbor of Mongolia, but also an important trade and economic partner of Mongolia, Speaker G.Zandanshatar said the South Korean government’s Official Development Assistance played a role in the social and economic development of Mongolia and the two governments should bring their focus on enhancing the benefits of loans and assistance and joint projects and programs.

Zandanshatar also highlighted the importance to intensify bilateral trade, investment and economic cooperation of Mongolia and the Republic of Korea.

In turn, the Ambassador pointed out that the visit paid by South Korean Prime Minister Lee Nak-yeon to Mongolia was significant for bringing up the level of bilateral ties and affirmed his willingness to work on taking measures to strengthen the mutual understanding and friendship of the countries. He also mentioned that the work to advance the bilateral relations to a level of strategic partnership, which was agreed during the Prime Minister’s visit to Mongolia, is expected to be achieved within the framework of the 30th diplomatic anniversary.

The sides at the meeting also exchanged opinions on consolidation of peace and security in the Northeast Asian region and broadening of security cooperation as well as other issues concerning economic, trade and business partnership.

Parliament Speaker G.Zandanshatar also touched upon an issue, which was discussed at the aforementioned visit of the South Korean Prime Minister, of having a roadmap for facilitating mutual visits by citizens of the two countries, and having a visa waiver agreement in the distant future.