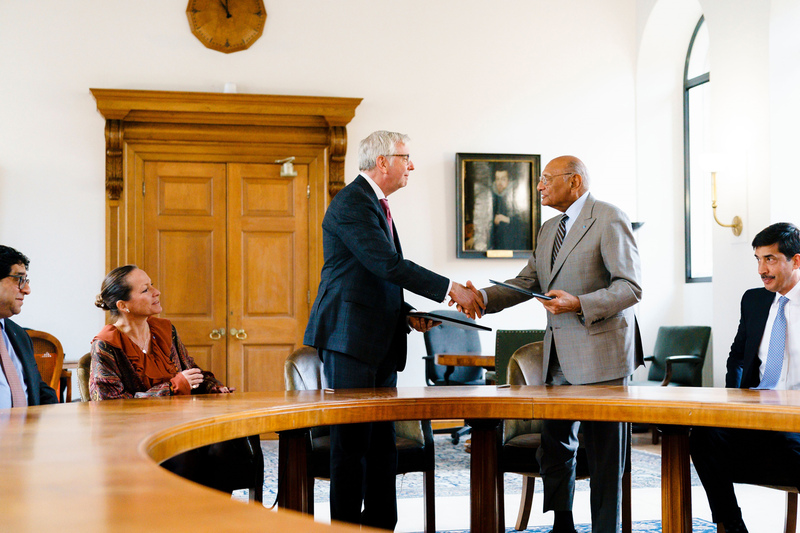 AKIPRESS.COM - The University of Central Asia (UCA) and the University of Cambridge signed a Memorandum of Understanding on February 25 to promote academic partnership, and collaborate in areas such as joint research, faculty and student exchange, as well as sharing of academic and educational material, UCA said.

The signing ceremony, at Cambridge’s Old Schools Building, was attended by Princess Zahra Aga Khan, Members of UCA’s Board of Trustees, the Rector and Deans of UCA, and senior representatives from Cambridge.

The Memorandum of Understanding builds on the University of Cambridge’s centuries-old commitment to academic excellence and on the ongoing relationship with the University of Central Asia. The partnership between the two institutions is expected to benefit scholars in the form of opportunities for joint research in areas of importance to Central Asia and globally through the agencies of the Aga Khan Development Network (AKDN).

Thanking Professor Toope for his welcome remarks, Dr. Shamsh Kassim-Lakha, Chairman of UCA’s Board of Trustees, and Diplomatic Representative of the AKDN in the Kyrgyz Republic, said “It is important to recognise that the agreement we are signing today is built on the confidence emanating from the efforts of colleagues at both our institutions. These early steps have focused on the development of our Central Asian faculty, thanks to the generous and continued support of the Cambridge Trust and your Faculty of Education.”

“His Highness the Aga Khan, Chancellor of UCA, has often reminded us that there are two measures of success of any university; the careers of its graduates and the quality of research, which is carried out in the universities, and then used for the benefit of the communities it serves,” added Dr. Kassim-Lakha.

The University of Central Asia was founded in 2000 as a private, not for profit, secular university under an International Treaty signed by the Presidents of Tajikistan, Kyrgyzstan and Kazakhstan, and His Highness the Aga Khan; ratified by their respective Parliaments and registered with the United Nations.