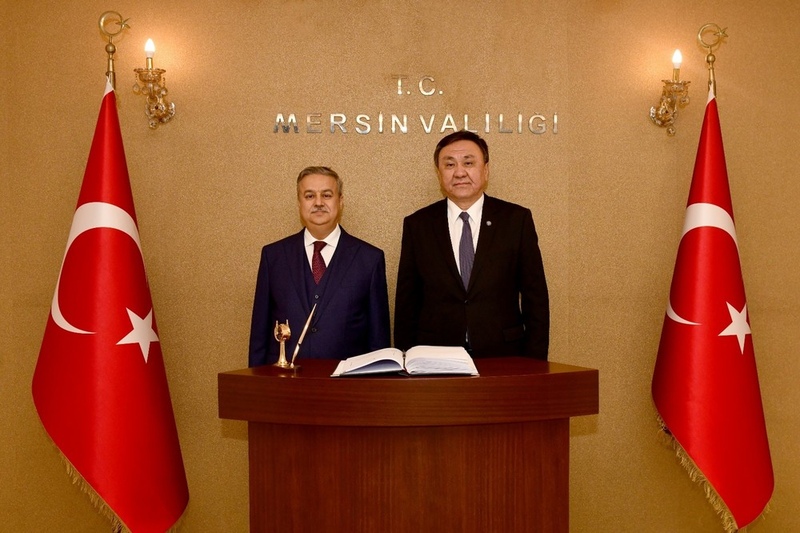 
As part of the visit, Omuraliev met with the Governor of Mersin Province Ali Su and the Mayor of the city of Mersin Vahap Secher.

In terms of development of the regions of Kyrgyzstan, the Ambassador noted the necessity of further expansion of trade, economic and investment cooperation between Kyrgyzstan and Mersin province, the trade turnover between them is more than 8 million US dollars, as well as the establishment and development of existing bilateral cooperation between the cities of Kyrgyzstan and the city of Mersin.

During the meeting with President of the Mersin Chamber of Commerce and Industry Aihan Kyzyltan, the President of the Mersin Commodity Exchange Abdullah Ozdemir and businessmen of mentioned institutions Omuraliev made presentations on the investment climate and opportunities of the Kyrgyz Republic, the conditions for doing business (liberal taxes, costs of doing business, etc.), macroeconomic indicators and the foreign trade turnover of the Kyrgyz Republic, on the membership of the Kyrgyz Republic in the EAEU, informed regarding Kyrgyz investment projects and also presented a promotional video about Kyrgyzstan. Omuraliev proposed businessmen to open new production sites in Kyrgyzstan and expressed readiness to assist in their activities in the Kyrgyz Republic, and also answered all their questions. There were discussed issues of lending, price-setting, import of beans from the Talas region of Kyrgyzstan to Turkey and other countries.

In order to meet with citizens of Kyrgyzstan who live in Mersin, Mersin Municipality provided a conference room at the Palace of Congresses and Exhibitions. At the request of the Embassy, a specialist from the Mersin Provincial Migration Directorate M.Murat participated at the meeting.

During the meeting the Ambassador informed the citizens of Kyrgyzstan about the measures taken by the Government regarding the protection of citizens, as well as about meetings in Mersin. There were discussed issues of protecting the rights and interests of citizens of the Kyrgyz Republic in Turkey, the rights and obligations of foreign citizens residing in Turkey, and for the purpose of legal stay in Turkey were given answers to numerous questions of citizens of Kyrgyzstan regarding the procedure for applying for a residence, work permit, citizenship etc.

As part of his trip, Ambassador also met with the Rector of Mersin University Chamsary and Kyrgyz students studying at that University, during which were discussed issues of study and conditions of stay of Kyrgyz students as well as inter-university cooperation between Kyrgyzstan and Turkey.

Mersin is the administrative center of the province of the same name. The province is located in the south-east of Turkey and on the Mediterranean coast. The population is 1.840.425 million people.

Mersin is the largest port in Turkey where the textile, chemical, processing and glass industries are well developed. The Mersin Free Economic Zone is the largest in TR, where over 300 companies carry out activities. The production of citrus, fruits and vegetables has been developed.