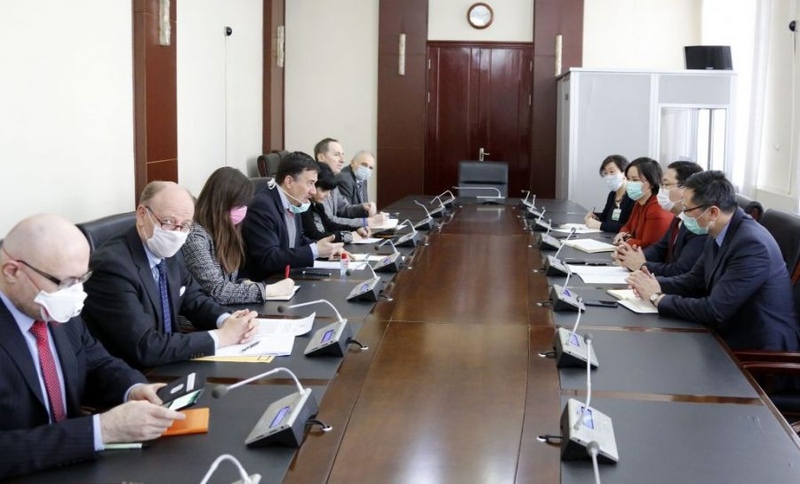 AKIPRESS.COM - State Secretary of the Ministry of Foreign Affairs of Mongolia D.Davaasuren on March 10 met with Ambassadors of the European Union and its member states including the Republic of Bulgaria, French Republic, Czech Republic, and the Federal Republic of Germany to Mongolia, Montsame reported.


The Ambassadors emphasized that this year marks the 50th anniversary of the Treaty on the Non-Proliferation of Nuclear Weapons (NPT) - the single most important treaty covering nuclear non-proliferation and disarmament – and that it is necessary to intensify the implementation of the still significant treaty. Therefore, the EU side introduced its agenda for the 2020 Review Conference of the Parties to the Non-Proliferation Treaty to be held in New York between April and May 2020 at the meeting.

State Secretary D.Davaasuren informed that Mongolia has been developing regional and global initiatives to contribute to the treaty’s implementation as non-proliferation of nuclear and mass destruction weapons and disarmament are part of Mongolian foreign policy priorities. In particular, Mongolia declared its territory a nuclear-weapon-free zone in 1992 and has been hosting an annual international conference in the framework of its Ulaanbaatar Dialogue Initiative for Northeast Asian Security since 2013, he said. The State Secretary then underlined that the country has plans to have a Memorandum on international security and nuclear-weapon-free status signed at the conference to take place in New York and is currently preparing for the Fourth Conference of Nuclear-Weapon-Free Zones and Mongolia scheduled for April 24.

Noting that countries should join their efforts to release a declaration that would address the issues facing disarmament and non-proliferation of nuclear weapons, the two sides agreed to continue to cooperate in this effort.

At the end of the meeting, State Secretary D.Davaasuren briefly informed the Ambassadors of the first COVID-19 case in Mongolia recorded on March 10, answered their inquiries, and exchanged views on the measures that can be jointly taken against the disease.