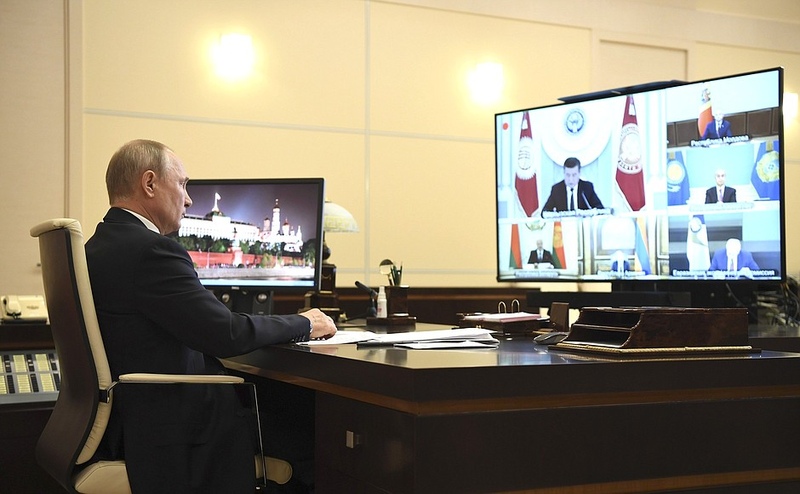 AKIPRESS.COM - A common gas transit tariff in the Eurasian Economic Union (EAEU) cannot be introduced with the current integration level, Russian President Vladimir Putin said at a meeting of the Supreme Eurasian Economic Council in a video conference format on Tuesday.

"Almost the entire draft has been approved, expect for a single paragraph on gas transport tariffs. The President of Kyrgyzstan, who spoke before me, also mentioned this. There is a formula supported by three countries – Russia, Kazakhstan and Kyrgyzstan. Under this approach, the agreement on gas prices could be reached later as part of talks on building a common gas market within the EAEU. Our Armenian and Belarusian colleagues have not accepted this formula so far. They have their own point of view on this matter. If they agreed to this approach, there would be no other obstacles left for approving the Strategic Directions," he said.

"As for the common tariff on transportation and transit of gas proposed by our Armenian and Belarusian friends, we suggest that a common tariff may only be introduced on a common market with a common budget and a common taxation system. Such a deep integration level has not been reached in the EAEU so far," Tass state news agency reported Putin as saying.

Putin stressed that so far prices should be formed based on the market environment, considering the costs and investments of suppliers, as well as should ensure return on capital invested in production. The president added that it is the world’s practice.

Vladimir Putin believes that tariff issues on the EAEU gas market can be discussed later at the expert level. "If the positions of our Armenian and Belarusian friends remain unchanged, it would probably be logical to exclude the item on gas from the draft Strategy [on the EAEU development until 2025] altogether to approve it today. The discussion of approaches to gas pricing can be continued with experts from member states and the Eurasian Economic Commission," President Putin said.