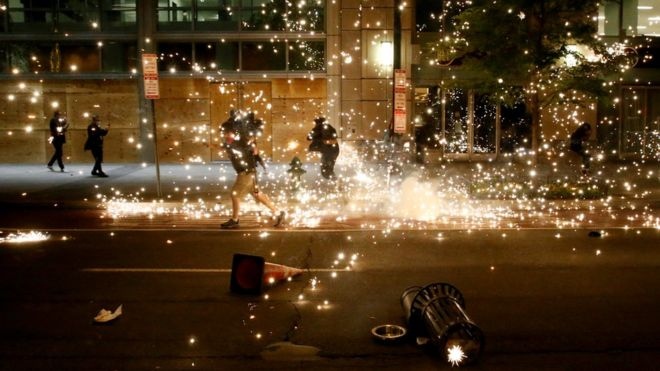 AKIPRESS.COM - Violence has erupted in cities across the US on the sixth night of protests sparked by the death in police custody of African-American George Floyd, BBC reports.

Curfews have been imposed in nearly 40 cities, but people have largely ignored them, leading to tense stand-offs.

Police vehicles were set on fire and shops were looted in several cities.

The National Guard - the US reserve military force for domestic emergencies - said on Sunday that 5,000 of its personnel had been activated in 15 states and Washington, DC, where crowds once again gathered near the White House, this time lighting fires and throwing stones at riot officers.

There were multiple instances of police vehicles being vandalised and set alight on Sunday. Riot officers continued to respond with tear gas and flash grenades.

In Minneapolis, where Mr Floyd lost his life, a lorry driver was arrested after reportedly breaching a road barrier before speeding towards a crowd of protesters marching along a major highway.