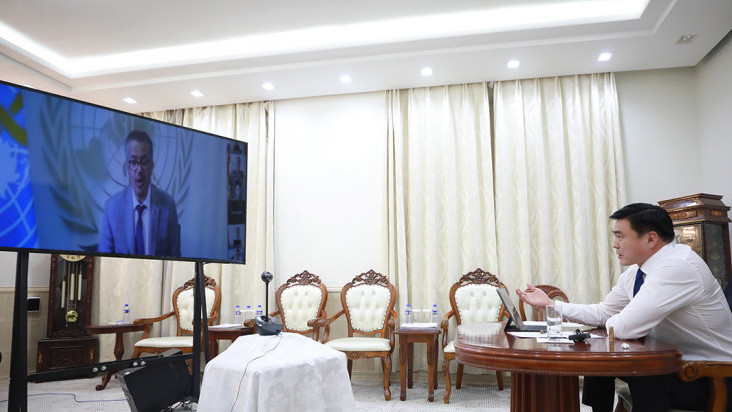 AKIPRESS.COM - The session of the Executive Bureau of the United Cities and Local Governments (UCLG) was held online on May 29 with mayor of Ulaanbaatar S.Amarsaikhan in attendance, Montsame reports.

The session was attended by Mohamed Boudra, President of the UCLG, Tedros Adhanom Ghebreyesus, Director-General of the World Health Organization, Maimunah Mohd. Sharif, United Nations Under Secretary General, the Mayors of Rome, Barcelona, Emilia-Romagna, Montevideo, Surabaya, Gaziantep Geneva, Ouagadougou, Sala and Polokwane, the Governor of Imbabura and the Deputy Mayor of Lisbon.

During the meeting, S.Amarsaikhan, Mayor of Ulaanbaatar and the Governor of the Capital City, said, “The challenges facing the world underscoring the need to reform the global governance system. The most important step in this direction is to ensure the participation of local governments in global decision-making process. International agreements should be developed in consultation with local and regional governments and include their roles and responsibilities. It is proposed to represent local governments in the UN governing body. Furthermore, it is important to include municipalities in the national decision-making system. In particular, we need to move from direct governance to multi-level governance by setting up a working group on a specific city in the national council, so that local, regional and national governments can act as equal partners and work towards mutual understanding. ”

“Moreover, measures have also been taken to support businesses to reduce the tax burden amid the COVID-19 pandemic. However, these tax privileges are not related to taxes paid to the state budget, but to reduced regional and local taxes. In the future, measures to support citizens should be implemented from the national fund, not from the city budget. Many of the important issues, such as uncontrolled urbanization, congestion, pandemics, and environmental degradation, are often subject to large cities. In order to reduce the congestion in the capital city, the development direction should be shifted to small and medium cities. Creating jobs and infrastructure, and implementing cultural and social projects in small towns will address unemployment and youth outflows. The same problem applies to rural areas, which play a role in supporting urban life and it is important to develop different territories for sustainability.”

By joining this organization, it is important for city leaders and representatives to gather and discuss issues and experiences of other cities in the world, as there is a great opportunity for cities around the world to unite and work together to solve problems.