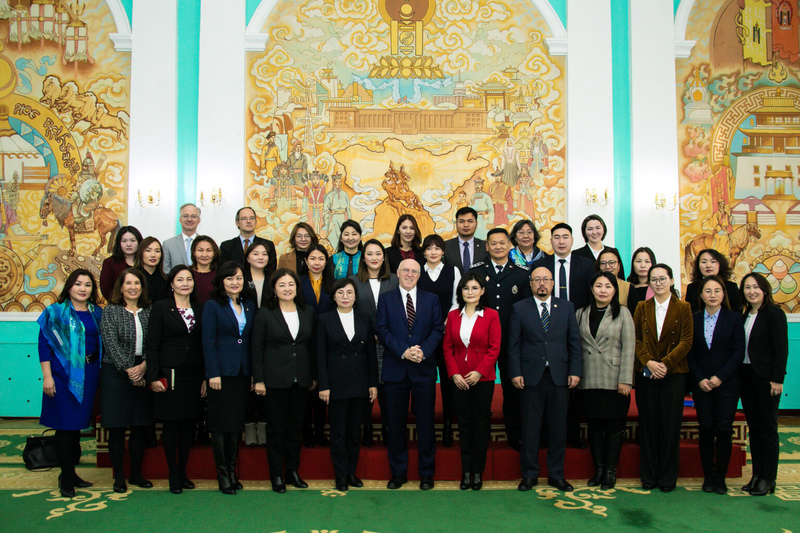 AKIPRESS.COM - In an October 27 ceremony, senior U.S. and Mongolian officials jointly launched the U.S.-Mongolia Child Protection Compact (CPC) Partnership, which was signed in Ulaanbaatar on April 2, the US Embassy said.

Implementation of this historic partnership will strengthen the efforts of the Mongolian government and civil society to fight all forms of child trafficking in Mongolia.

During the launch event, U.S. Ambassador to Mongolia Michael Klecheski said the CPC illustrates the strength of the U.S.-Mongolia Strategic Partnership and the two countries’ shared commitment to combating child trafficking and making a real and enduring difference in children’s lives in Mongolia.

Representing Mongolia, Minister of Justice and Home Affairs Kh. Nyambaatar, Minister of Labor and Social Protection A. Ariunzaya, and Deputy Prosecutor General S. Alimantsetseg expressed their shared commitment to the success of the U.S.-Mongolia CPC Partnership. Through this partnership, Mongolia has pledged to make combating human trafficking a higher priority; to expand its support for trafficking victim protection services shelters and victim-centered investigations and prosecutions; and to establish a Multidisciplinary Task Force to improve interagency coordination on victim identification, protection, and investigation and prosecution of child trafficking crimes.

U.S. Ambassador John Richmond, who leads the U.S. Department of State’s Office to Monitor and Combat Trafficking in Persons (TIP Office), joined the event virtually to express that fighting human trafficking must remain a priority for all governments. He added that despite challenges, our governments can and will work together to protect Mongolian child trafficking victims, hold perpetrators accountable, and prevent child trafficking across Mongolia.

The TIP Office awarded the $5 million (nearly 15 billion MNT) CPC grant through a competitive process to World Vision, which will serve as the lead implementing partner for the CPC. The Asia Foundation and four Mongolian NGOs – The Gender Equality Center, Talita Asia, Unbound Mongolia, and Beautiful Hearts – will also be engaged as implementing partners under World Vision’s leadership. These organizations will work collaboratively with Ms. L. Nyamgerel, Head of the Task Unit of Crime Prevention and Coordinating Council, and members of the Mongolian National Sub-Council on Trafficking in Persons throughout the four-year partnership.

Ms. Margaret Schuler, Senior Vice President of World Vision, and Mr. Gordon Hein, Senior Vice President of The Asia Foundation, outlined their plans to work closely with the Mongolian government to increase capacity and collaboration of government, civil society, and private sector stakeholders to strengthen existing efforts to prosecute and convict child traffickers with a victim-centered approach, provide comprehensive trauma-informed care for child victims of trafficking, and prevent child trafficking in all its forms.