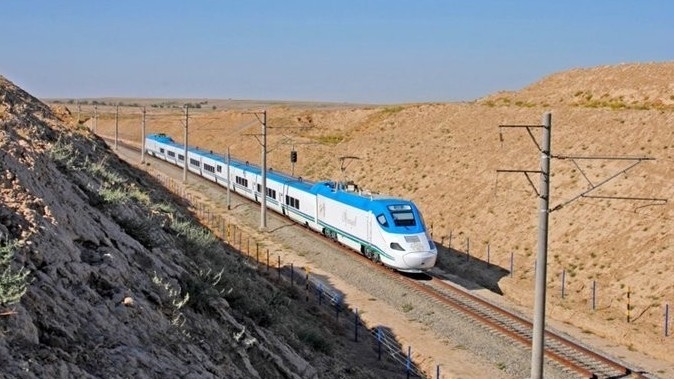 AKIPRESS.COM - Uzbekistan has been hugely expanding its transport infrastructure to further its aim of becoming a transport and logistics hub for Central Asia, Euronews reported.

Until recently, freight trains from the coal-rich Angren Basin had to cross two national borders to get to customers in the eastern Fergana Valley.

That changed with the completion of the Angren-Pop railway, a 169 kilometre-long direct section over the challenging mountain pass. This new section includes two kilometres of bridges and the Kamchiq Tunnel which, at over 19 km, is the longest tunnel in Central Asia.

Zaynutdin Umarov, head of supply at the state-run coal and kaolin mining company Uzbekkumir, says the tunnel has made a huge difference: "Before the opening of the Angren-Pop railway line, we had to send our products for the Fergana Valley through the Republic of Tajikistan. That was a slow and costly way. The opening of the Kamchiq tunnel increased our shipping volumes to Fergana Valley several times over."

The US $2 billion railway project was funded by the Uzbekistan government and international funding, with the tunnel constructed by China Railway Tunnel Group. This has hugely boosted the economy and made travelling between Fergana Valley and the rest of the country faster, cheaper and safer all year round. Previously, the harsh winters had made this difficult.

With billions ploughed into the construction of new railway and road infrastructure over recent years, Uzbekistan's broader goal is creating efficient travel corridors throughout Central Asia and, in the longer term, enabling direct sea port routes that will simplify access to international markets.

Sodiq Safoyev, First Deputy Chairman in Uzbekistan's Senate, says this is vital: "Of course, the most important task for Uzbekistan is to open routes to seaports using the most economical mode of transportation — and that's by rail. It's no coincidence that over US $7 billion have been spent, and 2.5 thousand kilometres of railway built in Uzbekistan over recent years."

One of only two double-landlocked countries in the world (meaning all the countries bordering it are also landlocked), Uzbekistan has built a railway to Mazar-e-Sharif in Afghanistan and is cooperating with other countries to extend this to the Persian Gulf and the Indian Ocean.

In his recent speech to the United Nations, Uzbekistan's President Shavkat Mirziyoyev laid bare the importance of these issues to his nation by proposing the establishment of a regional centre for the development of transport and communications under the UN's auspices. He hoped this would "ensure deep integration of our region into the global economic, transport and transit corridors."

With new facilities like the gas-to-liquid (GTL) plant nearing completion at Kashkadarya in the country's south, Uzbekistan is shifting from exporting its natural gas to processing it internally into products with high added value — including fuels for domestic industries and transit transportation.

What will be the 3rd biggest GTL facility in the world will produce kerosene for airlines, diesel for agriculture and other industries, liquefied petroleum gas for vehicles and naphtha to make plastics.

Alisher Sultanov, Ukbekistan's Energy Minister, is confident that a secure supply of fuels will help bring the country's ambitions as regional transport and logistics hub within reach: "Uzbekistan occupies a central position in the Central Asian region. It is, of course, the crossroads of all routes, both from North to South and from West to East. We understand that for the infrastructure to be of value, it needs to be used. And we will only have users when we provide all companies transiting our nation with environmentally friendly fuel that meets international standards. And this plant will be producing just such fuel."