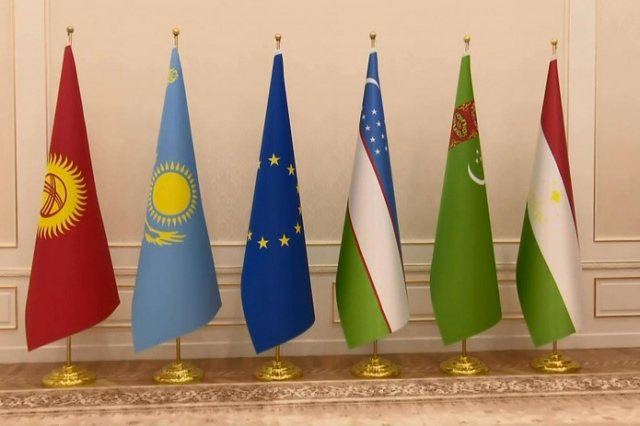 AKIPRESS.COM - The Foreign Ministers of Kazakhstan, Tajikistan, Turkmenistan and Uzbekistan, the First Deputy Foreign Minister of the Kyrgyz Republic, as well as the European Union’s (EU) High Representative for Foreign Affairs and Security Policy/Vice-President of the European Commission and European Commissioner for International Partnerships held the 16th EU-Central Asia ministerial meeting on 17 November 2020. The meeting exceptionally took place through video-conference, given the restrictions caused by the Covid-19 pandemic.

The participants reaffirmed their joint commitment to forging a strong, ambitious and forward-looking partnership that builds upon the strong mutual interests between the two regions. They reaffirmed their commitment to work together for peace, security, universal human rights, democracy and sustainable development in full respect for international law.

The participants discussed the repercussions of the Covid-19 pandemic for their respective regions and stressed their determination to work together to promote resilience, prosperity and a green, sustainable and inclusive post-Covid recovery. The Central Asian Ministers expressed strong appreciation for the “Team Europe” solidarity package worth EUR 134 million delivered to the region to meet the immediate needs of healthcare systems and address longer-term socio-economic challenges.

The EU and Central Asian Foreign Ministers emphasised the particular relevance of the priorities set out in the EU Strategy on Central Asia adopted in 2019 in the current context and for the future development of the region. The EU reaffirmed its wish to strengthen its role as a partner for the Central Asian countries in their reform processes, as a supporter of their integration in the world trading system and of their efforts to work closely together. The EU commended initiatives aimed at promoting closer regional cooperation in Central Asia, including on border management, trade facilitation, people-to-people contacts and water management, as well as the intra-regional solidarity displayed during the Covid pandemic, all of which the EU concretely supports through financial and technical means.

The EU and Central Asian representatives reaffirmed the importance of progressing on the rule of law, democratic governance, gender equality and universal human rights, which is a key element for EU cooperation with its partners around the world. As this year marks the twentieth anniversary of UN Resolution 1325 on Women, Peace and Security and the twenty-fifth anniversary of the Beijing Platform for Action, the participants underlined the importance of promoting the full, equal and meaningful participation of women and of civil society organisations in decision-making. They called for stepping up cooperation to create opportunities for youth in the region, including better access to quality education for all, especially girls, and decent work.

The EU and Central Asian Foreign Ministers welcomed mutual cooperation in healthcare and education, as key factors in the sustainable socio-economic development of the region.

The EU encouraged continued progress in the implementation of the Paris commitments on climate and in the region’s transition towards a green economy, including sustainable energy, aiming for carbon neutrality. The EU called on Central Asian countries to submit new enhanced Nationally-Determined Contributions (NDCs) by the end of 2020. The EU welcomed the active participation of Central Asian countries in the ongoing negotiations for the modernisation of the Energy Charter Treaty.

The EU and Central Asian Foreign Ministers underline that science, technology and innovation play a key role in accelerating the pace of economic diversification and transformation, improving productivity and competitiveness, as well as enabling the full participation of the Central Asian countries in the global economy. The European Union and Central Asia countries stressed the importance of further cooperation in science, technology and innovation, including through the creation of an enabling environment.

The EU and Central Asian Foreign Ministers welcomed the outcomes of the High-Level Conference on “International and Regional Cooperation on Countering Terrorism and its Financing Through Illicit Drug Trafficking and Organized Crime” hosted by the Government of the Republic of Tajikistan in cooperation with the EU, UN, the OSCE and other international and regional organisations.

The EU and Central Asian Foreign Ministers welcomed the initiative of the Government of Turkmenistan to host on 12 December 2020, in Ashgabat, an International conference “Policy of Neutrality and its Importance in ensuring International Peace, Security, and Sustainable Development” devoted to the 25th anniversary of international recognition of the Status of Permanent Neutrality of Turkmenistan, as well as to organise an International High-Level Forum in the year of 2021, which has been declared by the United Nations General Assembly as the International Year of Peace and Trust. The participants welcomed the Group of Friends of Neutrality for peace, security and development formed on the platform of the United Nations at the initiative of the Government of Turkmenistan.

The participants stressed the need to intensify cooperation in the promotion of sustainable connectivity between Europe and Asia in infrastructure, transport and digital, building upon the EU’s Strategy on Connecting Europe and Asia and on the opportunities that would be provided under new EU financial instruments to leverage private investment in the region. They welcomed Uzbekistan’s proposal to host in 2021 an “EU-Central Asia Ministerial Conference on Connectivity and Sustainable Development”.

The participants agreed that a complete and immediate ceasefire be needed to advance in the comprehensive intra-Afghan reconciliation process, and a peaceful and prosperous Afghanistan free of terrorism is necessary for the development of the entire region. In this context, participants reaffirmed their joint commitment to enhance cooperation to promote an inclusive peace process, the universal human rights of all Afghans and sustainable development in Afghanistan. In this regard, the Participants noted the importance of the 9th Ministerial Conference of the Heart of Asia- Istanbul Process to be hosted by the Republic of Tajikistan in Dushanbe.

The Ministerial video-conference provided an opportunity to proceed with a fruitful and constructive exchange of views on the programming of EU aid for the budget cycle 2021-2027.

The participants stressed the importance of Enhanced Partnership and Cooperation Agreements (EPCAs) as a cornerstone of relations between the EU and the Central Asian countries.

The participants commended the recommendations made at the “EU-Central Asia Civil Society Forum” of 27 October 2020 and confirmed their determination to organise the first-ever “EU-Central Asia Economic Forum” in Bishkek in 2021. They welcomed these events as key opportunities for the civil societies and business communities of the two regions to contribute to the development of the EU-Central Asia partnership. The EU and Central Asian representatives welcomed Uzbekistan’s proposal to host an “EU-Central Asia Tourism Forum”.

The Participants expressed their deep appreciation to the European Union for hosting the virtual Meeting and agreed to meet in Dushanbe in 2021.