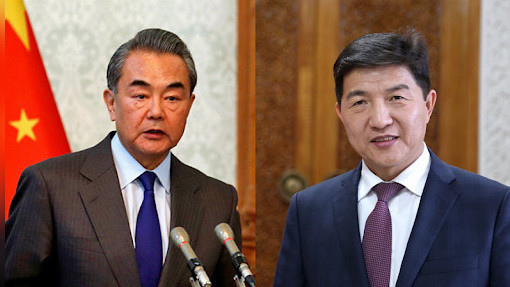 Wang made the remarks in a telephone conversation with his Mongolian counterpart Nyamtseren Enkhtaivan.

Noting that China and Mongolia are good neighbors and good friends, Wang said the comprehensive strategic partnership between the two countries enjoys sound momentum of development.

Not long ago, the 30,000 sheep donated by Mongolia have all arrived in China, which again sparked enthusiastic response in both countries. Reciprocally, China provided timely anti-epidemic supplies to help Mongolia deal with the epidemic effectively, Wang said.

Close cooperation between neighbors has helped the idea of a community with a shared future for the two countries win more support among the people, and further enhanced the friendship and mutual trust between the two sides, he said.

China is ready to continue to provide support within its capacity to Mongolia based on its needs, make good use of "green lanes," and speed up the resumption of work and production and cooperation on key projects, Wang said.

The two sides also need to make early plans for exchanges and cooperation in various fields next year and continue to push forward bilateral ties, he said.

Wang noted that it is in line with the common interest of both sides to ensure that there is no imported case between the two countries both ways.

For his part, Enkhtaivan spoke highly of the progress in bilateral relations and thanked China for its strong support and help to Mongolia's fight against the epidemic.

The Mongolian foreign minister said the "green lanes" opened for personnel and cargo flows between the two sides have played an important role in maintaining bilateral economic and trade cooperation.

Mongolia stands ready to work with China to extend mutual understanding and support to each other, properly solve the temporary difficulties in epidemic prevention and control, give full play to the transit functions of border crossings, and promote progress in major cooperation projects at an early date, Enkhtaivan said.

Mongolia is also willing to strengthen coordination and cooperation with China in international and regional affairs, he added.