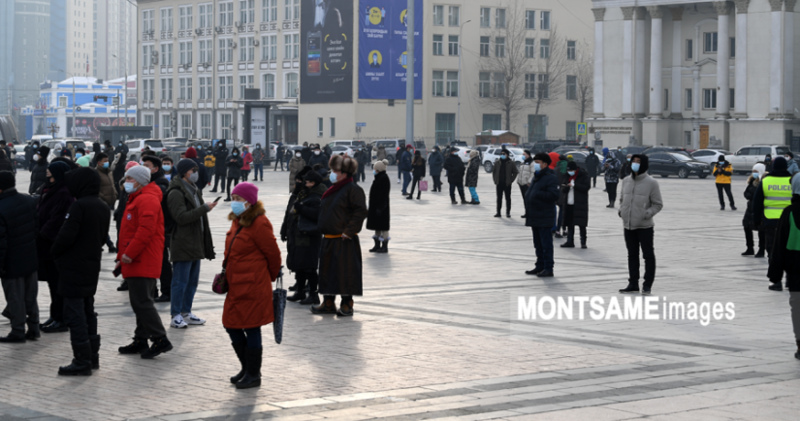 AKIPRESS.COM - On the evening of January 19, a live streaming news video showed a woman who gave birth a day before and her newborn baby being transferred from the Urgoo Maternity Hospital to the National Center for Communicable Diseases (NCCD) without any warm outerwear and footwear in cold air temperature causing widespread public criticism. She was diagnosed with COVID-19 earlier that day and was transferred to the NCCD with her baby for quarantine, Montsame reports.

On the morning of January 20, officials from the National Center for Communicable Diseases and Urgoo Maternity Hospital issued official apology to the mother, the newborn baby and their family. Currently, the mother and the baby are staying at the quarantine facility of the NCCD under treatment together with the father who also tested positive for the coronavirus and all are in stable condition.

However, the outraged citizens gathered in Ulaanbaatar on Jan 20 for a peaceful protest condemning the government for the action and demanding resignation of State Emergency Commission responsible for the COVID-19 emergency management and to hold them accountable.

Prime Minister Ukhnaa Khurelsukh convened an emergency meeting, after which, Deputy Prime Minister Sodbaatar, who also serves as Chairperson of the State Emergency Commission, and Minister of Health Munkhsaikhan announced their resignation. Both ministers were appointed to the position in August 2020 after the new government was formed following parliamentary election.

Deputy Prime Minister Sodbaatar said "Despite the fact that it was not my personal responsibility, I regret that such neglectful people lacking compassion are working for the Mongolian state. I apologize to the Prime Minister, who appointed me to this position, and the people of Mongolia."

"I wish to highlight that our team has not made any big strategic mistakes in the past and Mongolia is named as one of five countries who are successfully fighting against the pandemic. I thank for all frontline healthcare workers, professional inspection, police, emergency management organizations, and the government and State Great Khural of Mongolia for the cooperation.”

Afterwards, Health Minister T.Munkhsaikhan said "We have been striving in our battle against COVID-19 and are managing to overcome the transmission outbreaks with minimum losses. All efforts were made to correct the wrong healthcare system persistent for many years and certain achievements have been reached, as you may see. The irresponsible action of some people must not be the reason to deny the efforts committed by around 57,000 employees in the health sector" and notified to convey his resignation to the Prime Minister.

Mongolia’s law on government states that the Prime Minister chooses to resign members of the government after presenting the resignation to State Great Hural and the President. In line with the legislation, the Prime Minister will make the final decision, as reported by the Cabinet Secretariat Press Office.