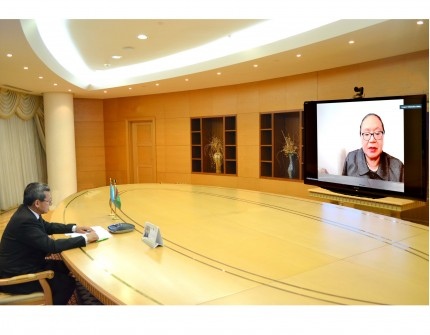 Parties discussed cooperation between Turkmenistan and the United Nations, the implementation of the 2030 Agenda for Sustainable Development.

In this regard, the preparedness of Turkmenistan to strengthen cooperation with the given Office of the UN was voiced which aims to unfold the economic potential of the Landlocked Developing Countries (LLDCs), chiefly through the development of transport interconnectivity. It was stated that Turkmenistan supports the implementation of the “Vienna Programme of Action for Landlocked Developing Countries for the Decade 2014-2024," said the Turkmen foreign ministry.

The head of MFA noted that realizing the importance of transport interconnectivity which contributes to regional and global economic integration, the leadership of Turkmenistan has on several occasions become the initiator of a number of UN General Assembly Resolutions in the area of sustainable transport. The Global Conference on Sustainable Transport held in Ashgabat in November 2016 was a success. All of these facilitate the establishment of reliable transport-transit corridors and stable transboundary trade between the countries.

The parties agreed on the need to enhance the mechanisms of attaining sustainable interconnectivity, which is particularly important for the LLDCs. Based on this notion, Turkmenistan has put forward the initiative on the provision of stable international transport, particularly in the period of emergencies.