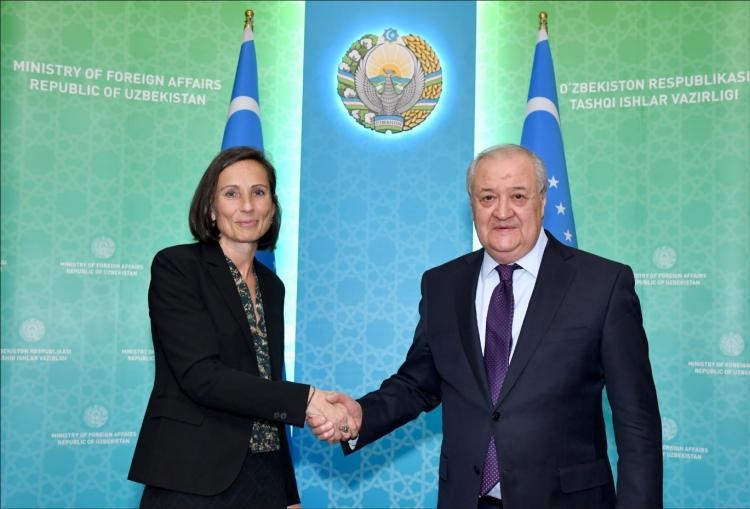 AKIPRESS.COM - Minister of Foreign Affairs of Uzbekistan Abdulaziz Kamilov accepted the newly appointed Head of the Delegation of the European Union in Uzbekistan, Ambassador Charlotte Adriaen on March 5. The Ambassador presented the Minister a copy of the credentials.

The Foreign Minister congratulated the Head of the EU Delegation with the appointment, wished her success in the development and strengthening of friendly relations of Uzbekistan with the European Union.

During the meeting, the state and prospects for cooperation between Uzbekistan and the EU in the political, trade and economic, financial and technical, cultural and humanitarian and other spheres were discussed.

Both sides appreciated the course of the negotiation process on the draft Enhanced Partnership and Cooperation Agreement between Uzbekistan and the EU.

The schedule, agenda and organizational issues of upcoming joint activities, including the next meeting of the Cooperation Council "Uzbekistan-EU", as well as the upcoming round of the High-level dialogue "European Union - Central Asia" on politics and security.

The hope is expressed for the provision of GSP + status to Uzbekistan until the end of March 2021, which will contribute to an increase in trade and economic cooperation between Uzbekistan and EU countries.

The interest in enhancing close cooperation with the European Union in the field of education, in particular through the "Erasmus" program, is announced.

Other issues of the general agenda are discussed at the meeting.