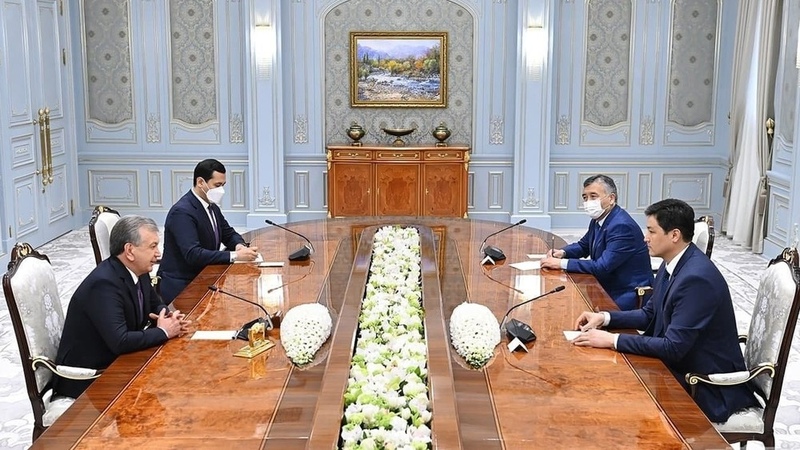 AKIPRESS.COM - On 26 March, President of the Republic of Uzbekistan Shavkat Mirziyoyev received the Prime Minister of the Kyrgyz Republic Ulukbek Maripov, who arrived in Tashkent to attend the meeting of the Joint Commission on Bilateral Cooperation, the Uzbek president's press office said.

Issues of further development of multifaceted cooperation between Uzbekistan and Kyrgyzstan were discussed at the meeting.

The President of Uzbekistan emphasized the importance of the timely and full implementation of the agreements adopted during the recent summit at the highest level to strengthen friendship, good neighborliness and strategic partnership.

In turn, Prime Minister Ulukbek Maripov expressed deep gratitude to the Leader of Uzbekistan for the warm welcome and conveyed sincere greetings and best wishes of the President of Kyrgyzstan Sadyr Zhaparov.

As the Co-Chairman of the Joint Commission, he also informed about the main results of the meeting and the decisions taken.

The President of Uzbekistan paid special attention to the issues of creating favorable conditions for increasing the trade turnover, promoting cooperation projects in industry, energy, agriculture and water management, the early launch of the Development Fund, as well as enhancing interregional, cultural and humanitarian exchanges.

The urgency of the earliest start of the construction of China – Kyrgyzstan – Uzbekistan railway and the increase in cargo transportation along the multimodal corridor Andijan – Osh – Sarytash – Irkeshtam was noted.

Following the meeting, the Prime Minister of the Kyrgyz Republic assured of his readiness to make every effort to unconditionally implement the agreements reached between the heads of the two states and aimed at the consistent development of the full-scale partnership.