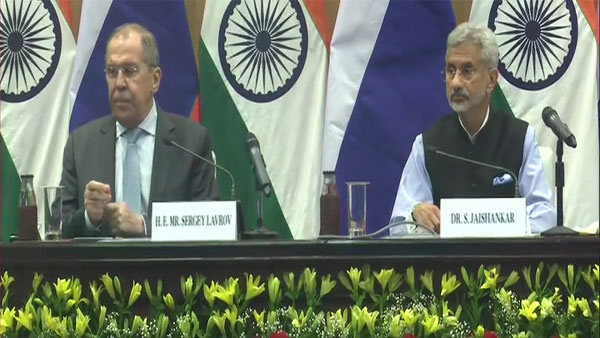 Lavrov, who visited India on April 5 & 6, held delegation-level talks with Jaishankar. Much of the discussion between the two ministers covered the preparations for President VladimirPutin’s visit for the annual summit to be held in India later this year.

After holding a discussion with the Lavrov, Jaishankar in his opening remarks, said, "We are both cognizant of the multi-polar and rebalanced nature of international relations today. We both understand the importance of our relationship to global peace, security and stability. And, therefore, as Foreign Ministers, we work hard to deliver on that responsibility.”

"On my part, I briefed Minister Lavrov on recent developments in India that open up new opportunities for Russian businesses in various sectors. The Atmanirbhar Bharat economic vision can facilitate a more contemporary economic relationship in the post-Covid era,” Indian foreign minister added.

“Our bilateral cooperation remains energetic and forward-looking. We talked about the longstanding partnership in the nuclear space and defense sectors. We assess positively our economic cooperation noting new opportunities in the Russian far east. We spoke of connectivity including theInternational North-South Transport Corridor and Chennai-Vladivostok Maritime Corridor,” Jaishankar said.“ We also found an appetite for greater investment in each other by both the countries. Russian support for our Gaganyaan programme has progressed for which we deeply appreciate. Our defense requirement in the past year was expeditiously addressed,” he added.

Jaishankar further said, "issues on which India is chairing UNSC committees came up in some detail. India has also taken over the Chair of BRICS and RIC from Russia for this year. And our common membership of the G-20, ASEAN-led forums, SCO and CICA added to the substance of our conversation.”

"One question on which we spent some time is the unfolding developments in and around Afghanistan, Jaishankar added. The Indo-Pacific region was also discussed between the two leaders.

During his opening remarks, Lavrov asserted that bilateral and political dialogue between the two countries is at its “sustainable highest” even amid COVID-19 restrictions. “Our countries are tied through a strategic partnership and at the heart of our partnership is the long-lived friendship between our nations and proximity of our stance on relevant international issues and our friendship.” “Our bilateral, political dialogue is at its sustainable highest even amid the stringent epidemiological restrictions,” he added.

India and Russia also discussed ways to deepen bilateral partnership in sectors such as investment, energy, military equipment production, nuclear and space, and moving ahead on talks for a Free Trade Agreement between India and the Eurasian Economic Union (EAEU).

Discussions also focused on the expanding energy cooperation between the two countries and views were also exchanged on regional and global matters. Our rapidly expanding energy cooperation that now includes long term commitments was also on the agenda,” Jaishankar said. According to India’s Ministry of External Affairs, Lavrov’s visit provides a unique opportunity to discuss important aspects of bilateral ties, review preparations for the next India Russia annual summit and discuss regional and international issues of mutual interest.