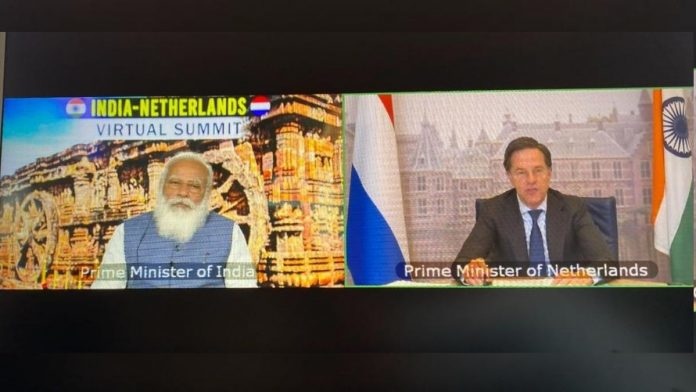 Netherlands Prime Minister Mark Rutte has lauded India’s Vaccine Maitri programme and said that India is a crucial partner both in the Indo-Pacific region and in the world at large.

“For EU, like the Netherlands, India is a crucial partner both in the region and in the world at large. Take for example United Nations. The Netherlands welcomes India’s commitment to COVAX as an essential partner in terms of accessing vaccine for low and middle-income countries. And we applaud India for its Vaccine Maitri programme,” Rutte said at the virtual summit with Indian Prime Minister Modi on April 9.

He also mentioned the important economic ties between the two countries, and said that, “…our ties go far beyond the economic matter alone. First, it’s worth noting that the Netherlands has the largest Indian community on the European continent and we house more than University students. We are proud of their achievements and their contributions.”

“We both believe in democracy and the rule of law, in strong institutions and multilateral cooperation and open and fair world trade. At a time these values are under increasing pressure. It’s important to form and protect global coalitions,” he added.

He further thanked Prime Minister Modi for his continued support on the trade front during the pandemic.

“Your support helped support the continuation of trade between our countries even in those difficult times. We even appreciated the air bubble which was an agreement between our two countries and this enabled our national carrier to bring many Dutch and EU citizen back to Europe and return Indian citizen to India including many coming from Latin America,” he said.

In his opening remarks, Prime Minister Narendra Modi said there have been similarities of approach between India and the Netherlands in dealing with global challenges like climate change, terrorism and pandemics.

Modi also said that both the countries are developing convergences in areas like Indo-Pacific resilient supply chains and global digital governance.

Modi said that setting up a fast track mechanism for investment promotion will give new momentum to the strong economic cooperation between the two countries.

Both countries have wide ranging cooperation including in areas of water management, agriculture and food processing, healthcare, smart cities and urban mobility, science and technology, renewable energy and space.

There are over 200 Dutch companies present in India with a similar presence of Indian businesses in the Netherlands.